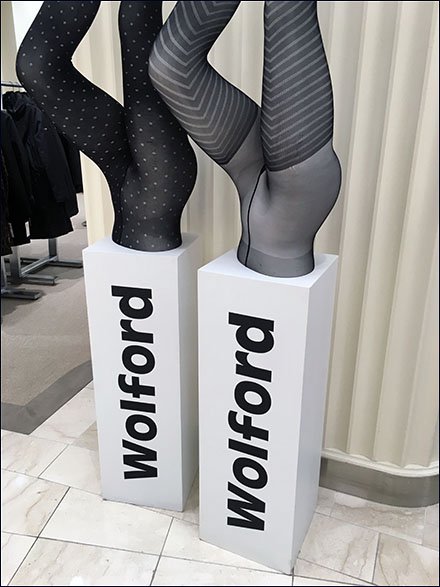 SCROLL DOWN FOR PHOTOS AND LINKS…
…to Wolford Retail Fixtures

This Wolford Retail Fixtures index page aggregates links
to all post and photos of retail merchandising, display, and outfitting
as well as deep Background courtesy of Wikipedia.

BACKSTORY: The Wolford AG, with its headquarter in Bregenz at Lake Constance in Austria, is a manufacturer of textiles of the top price segment focusing on tights, bodysuits and underwear, as well as women’s clothing and accessories.

The company is well known for its seamless products such as tights, but also for its co-operations with photographers such as Helmut Newton,[4]Howard Schatz, Jean Baptiste Mondino and Rankin.[5] Design-wise, Wolford co-operated with designers such as Karl Lagerfeld and Vivienne Westwood.

In 1949 in Bregenz on Lake Constance (Austria), a city with a genuine textile heritage, the industrialist Reinhold Wolff from Vorarlberg (Austria) and the retail entrepreneur Walter Palmers (*1903, †1983) from Vienna founded a company called Wolff & Co. KG, focussing on the production of women’s stockings made from real and artificial silk. They customized used American Cotton machines specifically for their own purposes, and for the first time processed polyamide fiber into stockings. The following year, the Wolford brand was officially registered. The brand name is an acronym of the name of the founder Reinhold Wolff and the city of Oxford. It should be internationally applicable. The international expansion began in the 1970s. In 1988, the company carried out a strategic refocusing and positioned its products in the luxury segment, which continues to today and is still being expanded. In addition to that, in April 1988, the company was transformed into a stock corporation. On February 14, 1995 Wolford went public with the so-called “Lady Share” in Vienna and Paris. The company made its mark over the years mainly due to its new seamless products, e.g. tights and bodysuits, as well as collaborations with designers such as Karl Lagerfeld, Emilio Pucci, Zac Posen, Kenzo, Valentino and Vivienne Westwood. Further, co-operations with photographers such as Helmut Newton and Mario Testino contributed to the brand awareness.

The Executive Board of the Wolford AG consists of Axel Dreher (COO/CFO) and Ashish Sensarma (CEO).[6] On 31 July 2015, Thomas Melzer, who had been CFO for three years, left the Wolford AG at his own request. His responsibilities were taken over by the boards members Dreher and Sensarma.http://www.textilzeitung.at/business/industrie/detail/thomas-melzer-verlaesst-wolford.html On September 7, 2013 the long-standing chairwoman of the supervisory board, Theresa Jordi, died. Since September 2014, Antonella Mei-Pochtler is chairwoman of the supervisory board. Since November 2014, Grit Seymour is Creative Director at Wolford.

Wolford produces tights and stockings for women and men, underwear for women, women’s clothing such as skirts, tops, shirts, pullovers etc., as well as accessories. All products are manufactured in Europe (Austria and Slovenia). Since March 2015, Wolford is a partner of Bluesign Technologies, a global network working for more sustainable production processes and more transparency in the fabrication of textiles.[7][8] (SOURCE: Wikipedia)

EDITOR’S NOTE: Wolford Retail Fixtures
Topmost posts may be scheduled but not yet live.
Please click further down the list if necessary.