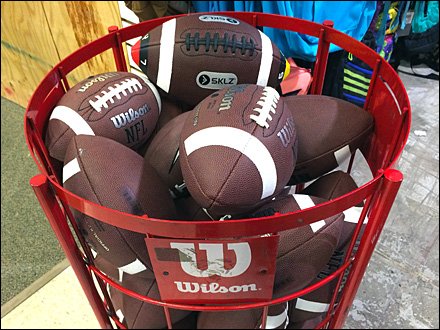 SCROLL DOWN FOR PHOTOS AND LINKS…
…to Wilson Store Fixtures

This Wilson Store Fixtures index page aggregates links
to all post and photos of retail merchandising, display, and outfitting
as well as deep Background courtesy of Wikipedia.

BACKSTORY: The Wilson Sporting Goods Company is an American sports equipment manufacturer based in Chicago, Illinois. Since 1989, it has been a foreign subsidiary of the Finnish group Amer Sports.[3]

The company traces its roots to the Schwarzschild & Sulzberger meatpacking company (later changed to Sulzberger & Son’s) based in New York, that operated meat packing slaughterhouses.[4]

Sulzberger & Son’s founded the “Ashland Manufacturing Company” in 1913 to use animal by-products from its slaughterhouses. It started out making tennis racket strings, violin strings, and surgical sutures but soon expanded into baseball shoes and tennis racquets.[1]

In 1915, Thomas E. Wilson, former president of meatpacker Morris & Company, was appointed President by the controlling banks and renamed the company “Thomas E. Wilson Company”. The company acquired the Hetzinger Knitting Mills to produce athletic uniforms and a caddie bag company which produced golf balls but soon expanded into footballs and basketballs.[1]

In 1918, Wilson left to concentrate on the beef-packing business, changing the Sulzberger company to Wilson & Co. (which would ultimately become Iowa Beef Packers and then be taken over by Tyson Foods). The packing company continued to have control in the company until 1966 when it was sold to LTV.[1]

Under new president L. B. Icely it acquired the Chicago Sporting Goods Company and struck a deal to supply the Chicago Cubs. It also hired Arch Turner, a leather designer who would design the leather football.[1]

After Rockne’s death, the company focused on golf, introducing the R-90, a sand wedge golf club inspired by Gene Sarazen‘s victory in the 1932 British Open.[1]

In 1931, it renamed itself “Wilson Sporting Goods Company”. During World War II it introduced the Wilson Duke football, featuring the best leather, ends that were hand-sewn, lock-stitch seams, and triple lining, which was adopted as the official ball of the National Football League.[1]

After the war, Wilson focused on tennis and signed Jack Kramer, who developed its line of Jack Kramer signed tennis rackets. Icley died in 1950 but the company continued to expand with many[who?] believing that Icely’s introduction of a computer to monitor inventory had been a huge help. In 1955, it acquired Ohio-Kentucky Manufacturing for making footballs. In 1964 it acquired Wonder Products Company, which made toys and custom-molded items. It transformed the custom-mold section to make protective equipment in football and baseball, such as face masks for football helmets and leg guards for baseball catchers.

In 1967, the company was acquired by Ling-Temco-Vought (LTV Corporation). Only three years after, PepsiCo became new Wilson’s owner. In those days, the company manufactured and commercialized the official balls of the National Basketball Association (NBA) and National Football League, and provided most of the uniforms of teams in Major League Baseball (MLB) and the United States Summer Olympics teams.

In 1979, Wilson tennis balls were first used in the US Open,[7] and still are used to this day. In 2006, the Australian Open began using Wilson Tennis Balls.[8]

In 1985, Wilson was acquired by Westray Capital Corporation through subsidiary WSGC Holdings. In 1989, WSGC merged with Bogey Acquisitions Company, which is affiliated with the Finnish group Amer Sports.[1] (SOURCE: Wikipedia)

EDITOR’S NOTE: Wilson Store Fixtures
Topmost posts may be scheduled but not yet live.
Please click further down the list if necessary.

For all Wilson Store Fixtures resources…