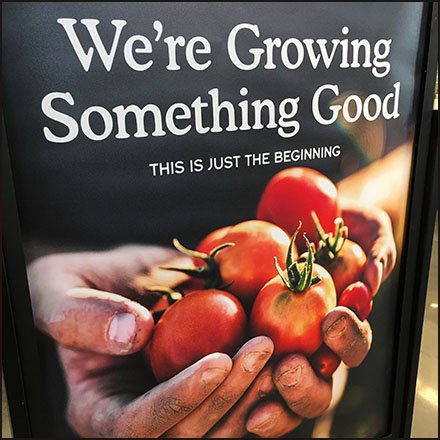 SCROLL DOWN FOR PHOTOS AND LINKS…
…to Whole Foods Store Fixtures

This Whole Foods Store Fixtures index page aggregates links
to all post and photos of retail merchandising, display, and outfitting
as well as deep Background courtesy of Wikipedia.

The precursors of Whole Foods were John Mackey and Renee Hardy Lawson’s SaferWay store, founded in 1978, and Craig Weller and Mark Skiles’ Clarksville Natural Grocery, both in Austin, Texas. On September 20, 1980, these stores merged to open the first Whole Foods Market Store, also in Austin, the company’s current headquarters.[4] In the 1990s, Whole Foods bought a series of organic food chain competitors, including Wellspring and Freshfield’s, quickly cementing its position as the highest-volume seller of organic food in the United States.[4] As of September 2015, it has 91,000 employees and 431 supermarkets in the United States, Canada, and the United Kingdom,[2] and has its main produce procurement office in Watsonville, California.[5]

As of 2015, founder John Mackey and Walter Robb were co-CEOs of the publicly traded company, with John Elstrott as chairman.[6][7][8] In November 2016, the company announced that Walter Robb would be stepping down as co-CEO at the end of year and would remain with the company as a director.[9] It became a Fortune 500 company in March 2005 and is the 30th largest retailer in the U.S., based on 2014 revenue.[10][11]

On June 16, 2017, it was announced that Amazon.com would acquire Whole Foods for $13.7 billion at $42 per share, a 27 percent premium to its previous closing price. Following the conclusion of the deal at the end of 2017, Whole Foods will become a subsidiary of Amazon, widely expanding Amazon’s presence as a physical retailer.[12]

On August 23, 2017, it was reported that the Federal Trade Commission approved the merger between Amazon.com and Whole Foods Market.[13]The following day it was announced that the deal would be closed on August 28, 2017.[14]