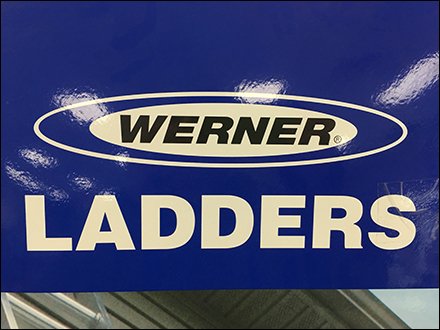 SCROLL DOWN FOR PHOTOS AND LINKS…
…to Werner Ladder Retail Fixtures

This Werner Ladder Retail Fixtures index page aggregates links
to all post and photos of retail merchandising, display, and outfitting
as well as deep Background courtesy of Wikipedia.

Werner Co. was founded in 1922 by Richard D. Werner as “R. D. Werner Co., Inc.,” a small business, selling materials for floors, carpets, and walls. The company quickly began to specialize in metal moldings, including a patented brand of metal kitchen trim called ChromtrimTM. R. D. Werner Co., Inc. became a leader in plastics extrusion during the World War II restrictions on civilian metal usage. After the war, Werner started working with aluminum and developed the various types of aluminum ladders for which it is best known. Werner began production of fiberglass ladders in 1963 and in 1981 developed the Glas*Mark® process to personalize fiberglass ladder rails with embedded customer graphics. In 1997, the company restructured, and sold a majority holding to the international investment group Investcorp S.A..

In December 2005, the Extruded Products Division (formerly WXP, Inc.) was sold to HIG Capital.[1] Werner reported audited net sales of $472.3 million for the year ending Dec. 31, 2005. As of March 31, 2006, Werner reported assets of $201 million and liabilities of $473.4 million.[2] Werner Co. filed for Chapter 11 protection under the bankruptcy code in Delaware on June 12, 2006, primarily due to excessive leverage, significant increases in raw material costs, and the loss of one of its largest customers. On June 8, 2007, a new company was formed by the major creditors to purchase substantially all the assets of the old company.