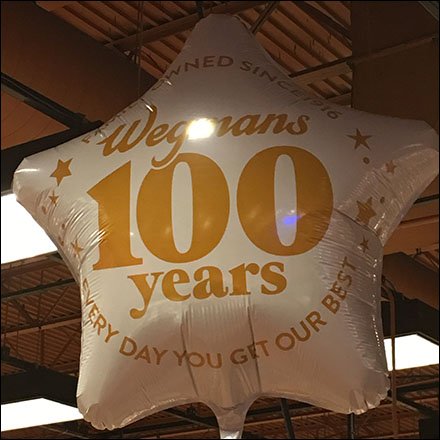 SCROLL DOWN FOR PHOTOS AND LINKS…
…to Wegman’s Retail Fixtures

This Wegman’s Retail Fixtures index page aggregates links
to all post and photos of retail merchandising, display, and outfitting
as well as deep Background courtesy of Wikipedia.

WEGMANS BACKSTORY: Wegmans is a regional supermarket chain with 92 stores: 46 in New York, 17 in Pennsylvania, 7 in New Jersey, 10 in Virginia, 8 in Maryland, and 4 in Massachusetts. It is one of the largest private companies in the U.S.:

Wegmans is a family-owned company, founded in 1916, headquartered in Rochester, NY. Danny Wegman is CEO; Colleen Wegman, his daughter, is president. Danny’s daughter Nicole Wegman is sr. vice president. Robert Wegman, Danny’s father, was chairman until his death in April 2006.

Founding Brothers Walter and John Wegman (Robert Wegman’s father and uncle) learned the food business by working in their parents’ store in Rochester. John peddled fresh produce from a pushcart, and in 1916, he opened the Rochester Fruit & Vegetable Company, which marks the beginning of Wegmans Food Markets. Walter joined him a year later. Robert Wegman assumed leadership of the company in 1950, guiding it until his death in 2006.  (Source: Wegmans)

The How and Why of Organic In-Store