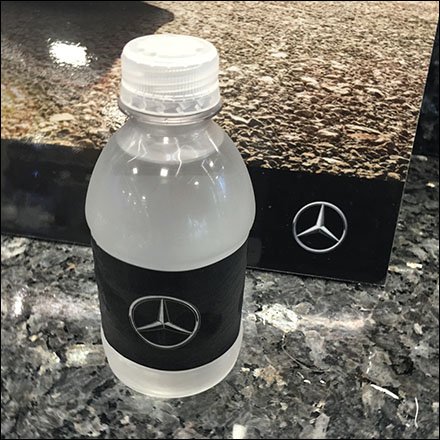 SCROLL DOWN FOR PHOTOS AND LINKS…
…to Water Bottle Store Fixtures

This Water Bottle Store Fixtures index page aggregates links
to all post and photos of retail merchandising, display, and outfitting
as well as deep Background courtesy of Wikipedia.

BACKGROUND: A water bottle is a container that is used to hold water, liquids or other beverages for consumption. The use of a water bottle allows an individual to transport, and drink, a beverage from one place to another.

A water bottle is usually made of plastic, glass, or metal. Water bottles are available in different shapes, colors and sizes. In the past, water bottles were sometimes made of wood, bark, or animal skins such as leather and sheepskin. Water bottles can be either disposable or reusable. Reusable water bottles can also be used for liquids such as juice, iced tea, alcoholic beverages, or soft drinks. This water bottle form can help save the environment, through reducing waste.

Although vessels to bottle and transport water were part of the earliest human civilizations,[1] bottling water began in the United Kingdom with the first water bottling at the Holy Well in 1621.[2] The demand for bottled water was fueled in large part by the resurgence in spa-going and water therapy among Europeans and American colonists in the 17th and 18th centuries.[3] The first commercially distributed water in America was bottled and sold by Jackson’s Spa in Boston in 1767.[4] Early drinkers of bottled spa waters believed that the water at these mineral springs had therapeutic properties and that bathing in or drinking the water could help treat many common ailments.[3]

The popularity of bottled mineral waters quickly led to a market for imitation products. Carbonated waters developed as means for approximating the natural effervescence of spring-bottled water, and in 1809 Joseph Hawkins was issued the first U.S. patent for “imitation” mineral water.[5] As technological innovation in nineteenth century lowered the cost of making glass and improved production speed for bottling, bottled water was able to be produced on a larger scale and the beverage grew in popularity.[4] Bottled water was seen by many as a safer alternative to 19th century municipal water supplies that could be contaminated with pathogens like cholera and typhoid.[6] By the middle of the century, one of America’s most popular bottlers, Saratoga Springs, was producing more than 7 million bottles of water annually.[4]

For Water Bottles by Title see…

For all Water Bottles resources…