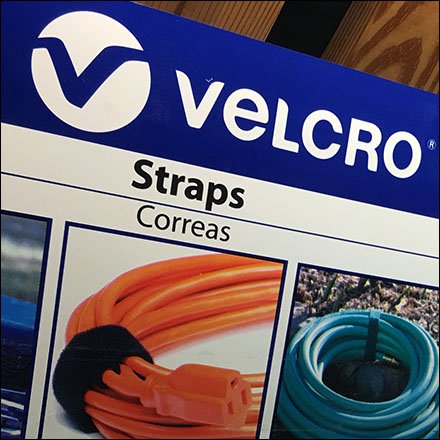 This Velcro Store Fixtures And Velcro Merchandising index page aggregates links
to all post and photos of retail merchandising, display, and outfitting
as well as deep Background courtesy of Wikipedia.

BACKSTORY: Velcro Companies is a privately held company that produces a series of mechanical based fastening products, including fabric hook and loop fasteners, under the brand name “Velcro”.

Swiss electrical engineer George de Mestral invented his first touch fastener when, in 1941 he went for a walk in the woods and wondered why Burdock seeds cling to his coat and dog. He discovered it could be turned into something useful.[1] He patented it in 1955 and subsequently refined and developed its practical manufacture until its commercial introduction in the late 1950s.

The fastener consisted of two components: a lineal fabric strip with tiny hooks that could “mate” with another fabric strip with smaller loops, attaching temporarily, until pulled apart.[2] Initially made of cotton, which proved impractical,[3] the fastener was eventually constructed with nylon and polyester.[4] (SOURCE: Wikipedia)

De Mestral gave the name Velcro, a portmanteau of the French words velour (“velvet”) and crochet (“hook”),[5][6] to his invention as well as his company, which continues to manufacture and market the fastening system.

BACKSTORY: Hook-and-loop fasteners, hook-and-pile fasteners or touch fasteners, consist of two components: typically, two lineal fabric strips (or, alternatively, round “dots” or squares) which are attached (sewn or otherwise adhered) to the opposing surfaces to be fastened. The first component features tiny hooks; the second features even smaller and “hairier” loops. When the two components are pressed together, the hooks catch in the loops and the two pieces fasten or bind temporarily during the time that they are pressed together. When separated, by pulling or peeling the two surfaces apart, the strips make a distinctive “ripping” sound. Hook and loop fasteners are often referred to by the genericized trademark “Velcro.” (SOURCE: Wikipedia)

EDITOR’S NOTE: Velcro Store Fixtures And Velcro Merchandising
Topmost posts may be scheduled but not yet live.
Please click further down the list if necessary.

For Velcro Store Fixtures And Velcro Merchandising by title see…

For all Velcro Store Fixtures And Velcro Merchandising resources…