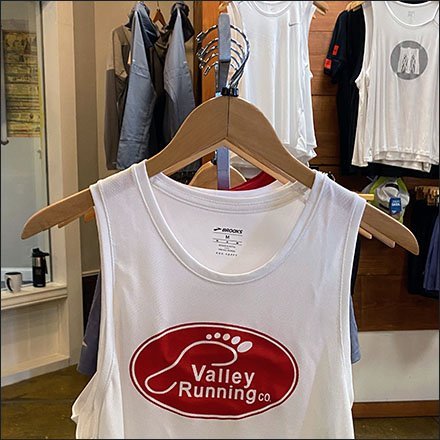 SCROLL DOWN FOR PHOTOS AND LINKS…
…to Valley Running Sporting Goods

This Valley Running Sporting Goods index page aggregates links
to all post and photos of retail merchandising, display, and outfitting
as well as deep Background courtesy of Wikipedia.

BACKSTORY: Jogging is a form of trotting or running at a slow or leisurely pace. The main intention is to increase physical fitness with less stress on the body than from faster running but more than walking, or to maintain a steady speed for longer periods of time. Performed over long distances, it is a form of aerobic endurance training.

Jogging is running at a gentle pace;[1] its definition, as compared with running, is not standard. In general, jogging speed is between 4 to 6 miles per hour (6.4 to 9.7 km/h)[2] Running is sometimes defined as requiring a moment of no contact to the ground, whereas jogging often sustains the contact.[3]Before the word jogging, it was known as “gently running,” which meant shaking up and down.[4] it helps to maintain the same tempo throughout the session without placing extra strain on body[5]. (SOURCE: Wikipedia)

BACKSTORY: Running is a method of terrestrial locomotion allowing humans and other animals to move rapidly on foot. Running is a type of gait characterized by an aerial phase in which all feet are above the ground (though there are exceptions).[1] This is in contrast to walking, where one foot is always in contact with the ground, the legs are kept mostly straight and the center of gravity vaults over the stance leg or legs in an inverted pendulum fashion.[2] A feature of a running body from the viewpoint of spring-mass mechanics is that changes in kinetic and potential energy within a stride occur simultaneously, with energy storage accomplished by springy tendons and passive muscle elasticity.[3] The term running can refer to any of a variety of speeds ranging from jogging to sprinting. (SOURCE: Wikipedia)