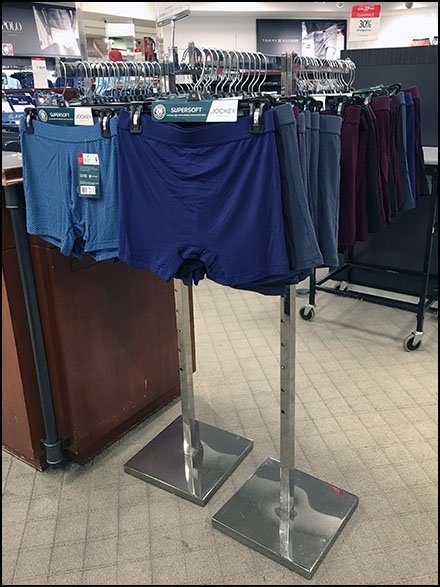 This Underwear Store Fixtures and Merchandising index page aggregates links
to all post and photos of retail merchandising, display, and outfitting
as well as deep Background courtesy of Wikipedia.

BACKSTORY: Undergarments are items of clothing worn beneath outer clothes, usually in direct contact with the skin, although they may comprise more than a single layer. They serve to keep outer garments from being soiled or damaged by bodily excretions, to lessen the friction of outerwear against the skin, to shape the body, and to provide concealment or support for parts of it. In cold weather, long underwear is sometimes worn to provide additional warmth. Special types of undergarments have religious significance. Some items of clothing are designed as undergarments, while others, such as T-shirts and certain types of shorts, are appropriate both as undergarments and as outer clothing. If made of suitable material or textile, some undergarments can serve as nightwear or swimsuits, and some are intended for sexual attraction or visual appeal.

Undergarments are generally of two types, those that are worn to cover the torso and those that are worn to cover the waist and legs, although there are also garments which cover both. Different styles of undergarments are generally worn by females and males. Undergarments commonly worn by females today include bras and panties (known in the United Kingdom as knickers), while males often wear briefs, boxer briefs or boxer shorts. Items commonly worn by both sexes include T-shirts, sleeveless shirts (also called singlets or tank tops), bikini underwear, thongs, and G-strings. (SOURCE: Wikipedia)

For Underwear Store Fixtures and Merchandising by Title see..

For all Underwear Store Fixtures and Merchandising resources see…