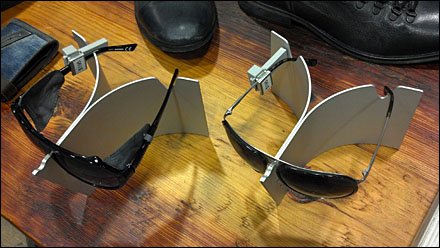 SCROLL DOWN FOR PHOTOS AND LINKS…
…to Tricorne 3-Sided Fixtures

This Tricorne 3-Sided Fixtures index page aggregates links
to all post and photos of retail merchandising, display, and outfitting
as well as deep Background courtesy of Wikipedia.

BACKSTORY: The tricorne or tricorn is a style of hat that was popular during the 18th century, falling out of style by 1800, though actually not called a “tricorne” until the mid-19th century. During the 18th century, hats of this general style were referred to as “cocked hats”. At the peak of its popularity, the tricorne varied greatly in style and size, and was worn not only by the aristocracy, but also as common civilian dress, and as part of military and naval uniforms.[1] Typically made from animal fiber, the more expensive being of beaver-hair felt and the less expensive of wool felt, the hat’s most distinguishing characteristic was that three sides of the brim were turned up (cocked) and either pinned, laced, or buttoned in place to form a triangle around the crown. The style served two purposes: first, it allowed stylish gentlemen to show off the most current fashions of their wigs, and thus their social status; and secondly, the cocked hat, with its folded brim, was much smaller than other hats, and therefore could be more easily tucked under an arm when going inside a building, where social etiquette dictated that a gentleman should remove his hat. Tricornes with laced sides could have the laces loosened and the sides dropped down to provide better protection from the weather, sun, and rain.[2][3] (SOURCE: Wikipedia)