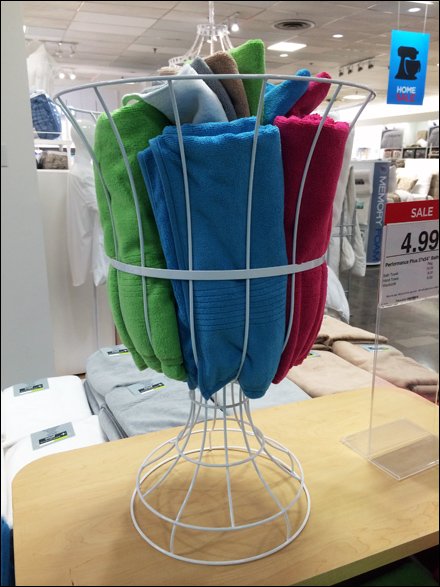 This Towel Store Fixtures And Merchandising index page aggregates links
to all posts and photos of retail merchandising, display, and outfitting
as well as deep Background courtesy of Wikipedia.

A towel is a piece of absorbent fabric or paper used for drying or wiping a body or a surface. It draws moisture through direct contact, often using a blotting or a rubbing motion.

In households, several types of fabric towels are used, including hand towels, bath towels and kitchen towels. In warm climates, people may also use beach towels. Paper towels are provided in commercial or office bathrooms for users to dry their hands. Paper towels are also used in households for a range of wiping, cleaning and drying tasks.

According to Middle Ages archaeological studies, “… closely held personal items included the ever present knife and a towel.”[1] However, the invention of the towel is commonly associated with the city of Bursa, Turkey, in the 17th century. These Turkish towels began as a flat, woven piece of cotton or linen called a pestamel, often hand-embroidered. Long enough to wrap around the body, pestamel were originally fairly narrow, but are now wider and commonly measure 90 by 170 centimetres (35 in × 67 in).[2] Pestamel were used in Turkish baths as they stayed light when wet and were very absorbent.

As the Ottoman Empire grew, so did the use of the towel. Weavers were asked to embroider more elaborate designs, aided by their knowledge of carpet-weaving.[3] By the 18th century, towels began to feature loops sticking up from the pile of the material. These looped towels became known as havly; over time, this word has changed to havlu, the Turkish word for towel, and means ‘with loops’.[4] Towels didn’t become affordable until the 19th century, with the cotton trade and industrialization. With mechanization, cotton terry-towelling became available by the yard as well as being stocked in shops as pre-made towels.[5]

Now, towels are available in a variety of sizes, materials and designs. Some hotels which provide towel and bath robes embed washable RFID tags into their linens to deter theft.[6] (SOURCE: Wikipedia)

For all Towel Merchandising resources see…