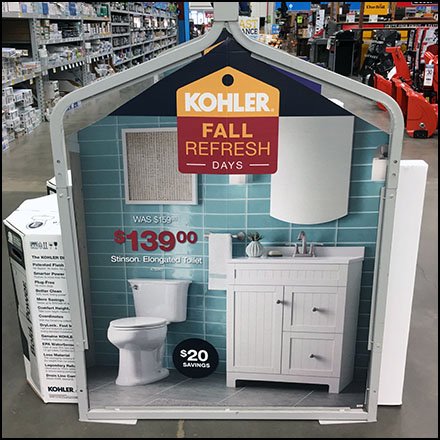 This Toilet Store Fixtures and Merchandising index page aggregates links
to all post and photos of retail merchandising, display, and outfitting
as well as deep Background courtesy of Wikipedia.

BACKSTORY: A toilet[n 1] is a sanitation fixture used for the storing or disposal of human urine and feces. Toilets can be with or without flushing water (flush toilet or dry toilet). They can be set up for a sitting posture or for a squatting posture (squat toilet). Flush toilets are usually connected to a sewer system in urban areas and to septic tanks in less built-up areas.

In many countries, private homes are designed with the flush toilet and the bath or shower in the same room, the bathroom. Other cultures find this unsanitary and have one room for body-washing and a separate room for excretion. Public toilets are permanently installed where frequent use is expected. Portable toilets or chemical toilets may be brought in for large but temporary gatherings.

In many developing countries toilets that do not use water for flushing are common. These might be simple pit latrines or composting toilets placed in outhouses rather than inside homes.

Many poorer households in developing countries have no access to a toilet at all, leading to open defecation. Serious waterborne diseases such as cholera and diarrhea occur when open defecation or poor sanitation results in human waste polluting water supplies. Historically, sanitation has been a concern from the earliest stages of human settlements.

A typical flush toilet is a ceramic bowl (pan) connected on the “up” side to a cistern (tank) that enables rapid filling with water, and on the “down” side to a drain pipe that removes the effluent. When a toilet is flushed, the sewage should flow into a septic tank or into a system connected to a sewage treatment plant. However, in many developing countries, this treatment step does not take place.

The amount of water used by conventional flush toilets usually makes up a significant portion of personal daily water usage. However, modern low flush toilet designs allow the use of much less water per flush. Dual flush toilets allow the user to select between a flush for urine or feces, saving a significant amount of water over conventional units. The flush handle on these toilets is pushed up for one kind of flush and down for the other.[1] In some places, users are encouraged not to flush after urination. Flush toilets can be plumbed to use greywater (previously used for washing dishes, laundry and bathing) rather than potable water (drinking water). Some modern toilets pressurize the water in the tank, which initiates flushing action with less water usage.

Another variant is the pour-flush toilet (often a type of pit latrine).[2] This type of flush toilet has no cistern, but is flushed manually with a few litres of a small bucket. This type of low-cost toilet is common in many Asian countries. It can use as little as 2–3 litres, and this can be greywater or rainwater.[2] Flush toilets, when used on ships, are typically flushed with seawater.

A squat toilet (also called “squatting toilet”, “natural position toilet”, or by many national names) is a toilet of any technology type (i.e. pit latrine, urine-diverting dry toilet, flush toilet etc.) which is used in a Squatting position rather than sitting. This means that the Defecation posture used is to place one foot on each side of the toilet drain or hole and to squat over it.

In 1976, squatting toilets were said to be used by the majority of the world’s population.[8] However, there is a general trend in many countries to move from squatting toilets to sitting toilets (particularly in urban areas) as the latter are often regarded as more modern.[9] (SOURCE: Wikipedia)

For Toilet Store Fixtures and Merchandising by title see…

For all Toilet Store Fixtures and Merchandising resources…