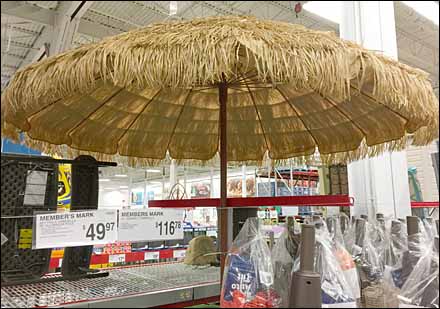 This Thatched Props and Thatched Merchandising index page aggregates links
to all post and photos of retail merchandising, display, and outfitting
as well as deep Background courtesy of Wikipedia.

BACKSTORY: Thatching is the craft of building a roof with dry vegetation such as straw, water reed, sedge (Cladium mariscus), rushes, heather, or palm branches, layering the vegetation so as to shed water away from the inner roof. Since the bulk of the vegetation stays dry and is densely packed—trapping air—thatching also functions as insulation. It is a very old roofing method and has been used in both tropical and temperate climates. Thatch is still employed by builders in developing countries, usually with low-cost local vegetation. By contrast, in some developed countries it is the choice of some affluent people who desire a rustic look for their home, would like a more ecologically friendly roof, or who have purchased an originally thatched abode,

Thatching methods have traditionally been passed down from generation to generation, and numerous descriptions of the materials and methods used in Europe over the past three centuries survive in archives and early publications.

In some equatorial countries, thatch is the prevalent local material for roofs, and often walls. There are diverse building techniques from the ancient Hawaiian hale shelter made from the local ti leaves (Cordyline fruticosa), lauhala (Pandanus tectorius) [1] or pili grass (Heteropogon contortus).

Wild vegetation such as water reed (Phragmites australis), bulrush/cat tail (Typha spp.), broom (Cytisus scoparius), heather (Calluna vulgaris), and rushes (Juncus spp. and Schoenoplectus lacustris) was probably used to cover shelters and primitive dwellings in Europe in the late Palaeolithic period, but so far no direct archaeological evidence for this has been recovered. People probably began to use straw in the Neolithic period when they first grew cereals—but once again, no direct archaeological evidence of straw for thatching in Europe prior to the early medieval period survives.[6][page needed]

Many indigenous people of the Americas, such as the former Maya civilization, Mesoamerica, the Inca empire, and the Triple Alliance (Aztec), lived in thatched buildings. It is common to spot thatched buildings in rural areas of the Yucatán Peninsula as well as many settlements in other parts of Latin America, which closely resemble the method of construction from distant ancestors. After the collapse of most extant American societies due to diseases introduced by Europeans, wars, enslavement, and genocide, the first Americans encountered by Europeans lived in structures roofed with bark or skin set in panels that could be added or removed for ventilation, heating, and cooling. Evidence of the many complex buildings with fiber-based roofing material was not rediscovered until the early 2000s. French and British settlers built temporary thatched dwellings with local vegetation as soon as they arrived in New France and New England, but covered more permanent houses with wooden shingles.

In most of England, thatch remained the only roofing material available to the bulk of the population in the countryside, in many towns and villages, until the late 1800s.[7]Commercial distribution of Welsh slate began in 1820, and the mobility provided by canals and then railways made other materials readily available. Still, the number of thatched properties actually increased in the UK during the mid-1800s as agriculture expanded, but then declined again at the end of the 19th century because of agricultural recession and rural depopulation. A 2013 report estimated that there were 60,000 properties in the UK with a thatched roof; they are usually made of long straw, combed wheat reed or water reed. [8]

Gradually, thatch became a mark of poverty, and the number of thatched properties gradually declined, as did the number of professional thatchers. Thatch has become much more popular in the UK over the past 30 years, and is now a symbol of wealth rather than poverty. There are approximately 1,000 full-time thatchers at work in the UK,[9] and thatching is becoming popular again because of the renewed interest in preserving historic buildings and using more sustainable building materials.[10] (SOURCE: Wikipedia)

For Thatched Props
and Thatched Merchandising by title see…

For all Thatched Props
and Thatched Merchandising resources…