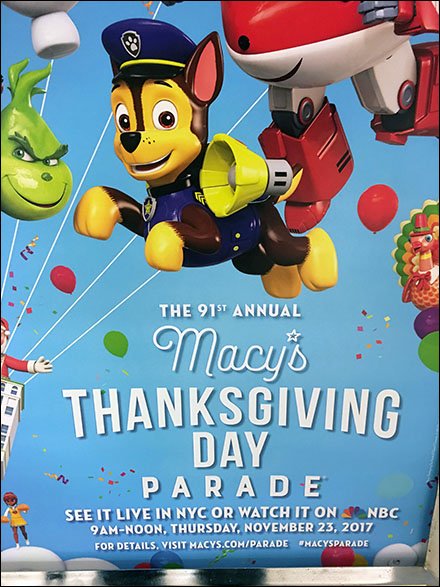 How To Promote A Thanksgiving Day Parade

SCROLL DOWN FOR PHOTOS AND LINKS…
…to Thanksgiving Retail Fixtures

This Thanksgiving Retail Fixtures index page aggregates links
to all post and photos of retail merchandising, display, and outfitting
as well as deep Background courtesy of Wikipedia.

BACKSTORY: Thanksgiving Day is a national holiday celebrated in Canada, the United States, some of the Caribbean islands, and Liberia. It began as a day of giving thanks for the blessing of the harvest and of the preceding year. Similarly named festival holidays occur in Germany and Japan. Thanksgiving is celebrated on the second Monday of October in Canada and on the fourth Thursday of November in the United States, and around the same part of the year in other places. Although Thanksgiving has historical roots in religious and cultural traditions, it has long been celebrated as a secular holiday as well.

Prayers of thanks and special thanksgiving ceremonies are common among almost all religions after harvests and at other times.[1] The Thanksgiving holiday’s history in North America is rooted in English traditions dating from the Protestant Reformation. It also has aspects of a harvest festival, even though the harvest in New England occurs well before the late-November date on which the modern Thanksgiving holiday is celebrated.[1][2]

In the English tradition, days of thanksgiving and special thanksgiving religious services became important during the English Reformation in the reign of Henry VIII and in reaction to the large number of religious holidays on the Catholic calendar. Before 1536 there were 95 Church holidays, plus 52 Sundays, when people were required to attend church and forego work and sometimes pay for expensive celebrations. The 1536 reforms reduced the number of Church holidays to 27, but some Puritans wished to completely eliminate all Church holidays, including Christmas and Easter. The holidays were to be replaced by specially called Days of Fasting or Days of Thanksgiving, in response to events that the Puritans viewed as acts of special providence. Unexpected disasters or threats of judgement from on high called for Days of Fasting. Special blessings, viewed as coming from God, called for Days of Thanksgiving. For example, Days of Fasting were called on account of drought in 1611, floods in 1613, and plagues in 1604 and 1622. Days of Thanksgiving were called following the victory over the Spanish Armada in 1588 and following the deliverance of Queen Anne in 1705. An unusual annual Day of Thanksgiving began in 1606 following the failure of the Gunpowder Plot in 1605 and developed into Guy Fawkes Day on November 5.[3] (SOURCE: Wikipedia)

For all Thanksgiving Retail Fixtures resources…