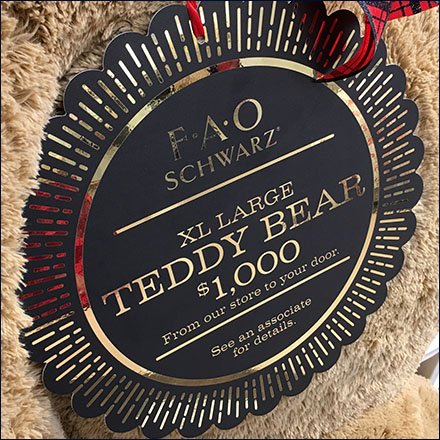 This Teddy Bear Merchandising And Teddy Bear Store Fixtures index page aggregates links
to all posts and photos of retail merchandising, display, and outfitting
as well as deep Background courtesy of Wikipedia.

BACKSTORY: A teddy bear is a soft toy in the form of a bear. Developed apparently simultaneously by toymakers Morris Michtom in the U.S. and Richard Steiff in Germany in the early years of the 20th century, and named after President Theodore “Teddy” Roosevelt, the teddy bear became an iconic children’s toy, celebrated in story, song, and film.[1] Since the creation of the first teddy bears which sought to imitate the form of real bear cubs, “teddies” have greatly varied in form, style, color, and material. They have become collector’s items, with older and rarer “teddies” appearing at public auctions.[2] Teddy bears are among the most popular gifts for children and are often given to adults to signify love, congratulations, or sympathy.

associated with teddy bears that enjoyed strong popularity in the 1980s and 1990s are Teddy Ruxpin and Care Bears. Various TV shows and movies have a teddy bear depicted, such as Super Ted and Mr. Bean.

Teddy bears have seen a resurgence in popularity as international “do-it-yourself” chains have opened. Among the largest and best-known are Build-A-Bear Workshop and Vermont Teddy Bear Company.

Some popular mass-marketed teddy bears made today include Rupert, Sooty, Paddington, and Pudsey Bear. Books have also been written with the teddy bear featured as their main character. These include Winnie-the-Pooh, Corduroy, Teddy Tells Time, Tristan the Teddy Bear (from the Teddy Bear Tales) and Teddy Dressing.

Winnie-the-Pooh is the name of a fictional character created by A. A. Milne, based on a teddy bear owned by his son Christopher Robin, who was the basis of the eponymous character in A. A. Milne’s work. Milne wrote many stories featuring Pooh Bear, some of which were adapted by the Walt Disney Company into theatrical shorts and/or compiled into movies such as 1977’s The Many Adventures of Winnie the Pooh and the 2011 film Winnie the Pooh.

Plush Panda on a Ceramic Pedestal