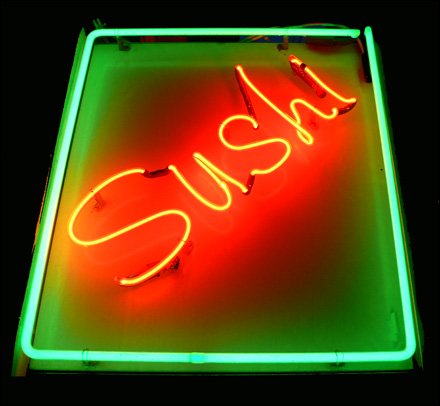 SCROLL DOWN FOR PHOTOS AND LINKS…
…to Sushi Merchandising Displays

This Sushi Merchandising Displays index page aggregates links
to all post and photos of retail merchandising, display, and outfitting
as well as deep Background courtesy of Wikipedia.

BACKSTORY: Sushi (すし, 寿司, 鮨, pronounced [sɯ̥ɕiꜜ] or [sɯ̥ꜜɕi]) is a Japanese dish of prepared vinegared rice (鮨飯, sushi-meshi), usually with some sugar and salt, accompanying a variety of ingredients (ネタ, neta), such as seafood, vegetables, and occasionally tropical fruits. Styles of sushi and its presentation vary widely, but the one key ingredient is “sushi rice”, also referred to as shari(しゃり), or sumeshi (酢飯).[1]

Sushi is traditionally made with medium-grain white rice, though it can be prepared with brown rice or short-grain rice. It is very often prepared with seafood, such as squid, eel, yellowtail, salmon, tuna or imitation crab meat. Many types of sushi are vegetarian. It is often served with pickled ginger (gari), wasabi, and soy sauce. Daikon radish or pickled daikon (takuan) are popular garnishes for the dish.

Sushi is sometimes confused with sashimi, a related dish in Japanese cuisine that consists of thinly sliced raw fish, or occasionally meat, and an optional serving of rice.[2] (SOURCE: Wikipedia)

For all Sushi Merchandising Displays resources…