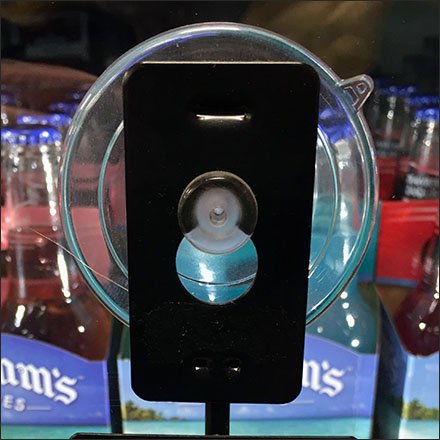 SCROLL DOWN FOR PHOTOS AND LINKS…
…to Suction Cup Store Fixtures

This Suction Cup Store Fixtures index page aggregates links
to all post and photos of retail merchandising, display, and outfitting
as well as deep Background courtesy of Wikipedia.

BACKSTORY: A suction cup, also known as a sucker, is an object that uses the negative fluid pressure of air or water to adhere to nonporoussurfaces, creating a partial vacuum.[1]

Suction cups are peripherial traits of some animals such as octopuses and squids, and have been reproduced artificially for numerous purposes.[2]

When the user ceases to apply physical pressure to the outside of the cup, the elastic substance of which the cup is made tends to resume its original, curved shape. The length of time for which the suction effect can be maintained depends mainly on how long it takes for air or water to leak back into the cavity between the cup and the surface, equalizing the pressure with the surrounding atmosphere. This depends on the porosity and flatness of the surface and the properties of the cup’s rim. (SOURCE: Wikipedia)

For all all Suction Cup Store Fixtures resources…