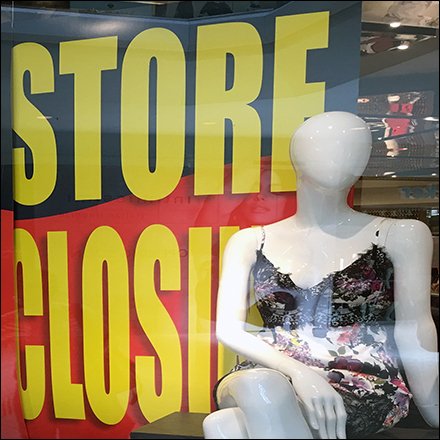 This Store Closing Signs In Retail index page aggregates links
to all posts and photos of retail merchandising, display, and outfitting
as well as deep Background courtesy of Wikipedia.

BACKSTORY: The retail apocalypse refers to the closing of a large number of American retail stores beginning in 2016.[5] Over 4,000 physical stores are affected as American consumers shift their purchasing habits due to various factors, including the rise of e-commerce.[6] Major department stores such as J.C. Penney and Macy’s have announced hundreds of store closures, and well-known apparel brands such as J. Crew and Ralph Lauren are unprofitable.[7] Of the 1,200 shopping malls across the US, 50% are expected to close by 2023.[8] The retail apocalypse phenomenon is related to the middle-class squeeze, in which consumers experience a decrease in income while costs increase for education, healthcare, and housing. Bloombergstated that the cause of the retail apocalypse “isn’t as simple as Amazon.com Inc. taking market share or twenty-somethings spending more on experiences than things. The root cause is that many of these long-standing chains are overloaded with debt—often from leveraged buyouts led by private equity firms.”[9] Forbes has said the media coverage is exaggerated, and the sector is simply evolving.[10] The most productive retailers in the US during the retail apocalypse are the low-cost, “fast-fashion” brands (e.g. Zara and H&M) and dollar stores (e.g. Dollar General and Family Dollar).[11]

Since at least 2010, various economic factors have resulted in the closing of a large number of American retailers, particularly in the department storeindustry. Sears, which had 3,555 stores in 2010, was down to 1,503 as of 2016, with more closures scheduled.[12] Sears also owns the retail chain Kmart Corporation, which operated 2,171 stores at its peak in 2000,[13] a number that has since dwindled to less than 750 with further closures planned.[14][15]

The term “retail apocalypse” began gaining widespread usage in 2017 following multiple announcements from many major retailers of plans to either discontinue or greatly scale back a retail presence, including companies such as H.H. Gregg, Family Christian Stores and The Limited all going out of business entirely.[16] The Atlantic describes the phenomenon as “The Great Retail Apocalypse of 2017,” reporting nine retail bankruptcies and several apparel companies having their stock hit new lows, including that of Lululemon, Urban Outfitters, American Eagle.[17] Credit Suisse, a major global financial services company, predicted that 25% of U.S. malls remaining in 2017 could close by 2022.[18]

The main factor cited in the closing of retail stores in the retail apocalypse is the shift in consumer habits towards online commerce.[71] Holiday sales for e-commerce were reported as increasing by 11% for 2016 compared with 2015 by Adobe Digital Insights, with Slice Intelligence reporting an even more generous 20% increase. Comparatively, brick-and-mortar stores saw an overall increase of only 1.6%, with physical department stores experiencing a 4.8% decline.[72] Another factor is an over-supply of malls,[73] as the growth rate of malls between 1970 and 2015 was over twice the growth rate of the population. In 2004, Malcolm Gladwell wrote that investment in malls was artificially accelerated when the U.S. Congress introduced accelerated depreciation into the tax code in 1954.[74] Despite the construction of new malls, mall visits declined by 50% between 2010-2013 with further declines reported in each successive year.[75] A third major reported factor is the “restaurant renaissance,” a shift in consumer spending habits for their disposable cash from material purchases such as clothing towards dining out and travel.[17] Another cited factor is the “death of the American middle class,” resulting in large-scale closures of retailers such as Macy’s and Sears, which traditionally relied on spending from this market segment.[76] The final factor in poor brick-and-mortar sales performance is a combination of poor retail management coupled with an overcritical eye towards quarterly dividends: a lack of accurate inventory control creates both underperforming and out-of-stock merchandise, causing a poor shopping experience for customers in order to optimize short-term balance sheets,[77] the latter of which also influences the desire to understaff retail stores in order to keep claimed profits high[78]. (SOURCE: Wikipedia)

Follow Babies R Us going out of business sales at…

For all Store Closing Signs In Retail resources see…