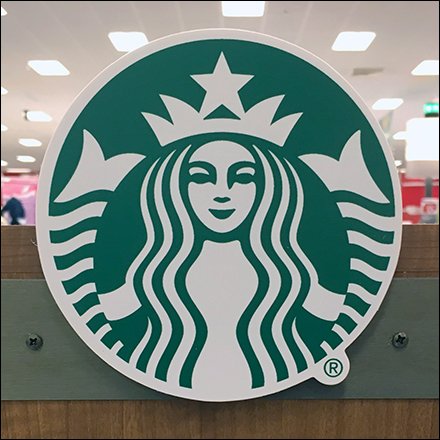 SCROLL DOWN FOR PHOTOS AND LINKS…
…to Starbucks Merchandising Store Fixtures

This Starbucks Merchandising Store Fixtures index page aggregates links
to all posts and photos of retail merchandising, display, and outfitting
as well as deep Background courtesy of Wikipedia.

BACKSTORY: Starbucks Corporation is an American coffee company and coffeehouse chain. Starbucks was founded in Seattle, Washington in 1971. As of November 2016, it operates 23,768 locations worldwide.

Starbucks is considered the main representative of “second wave coffee”, initially distinguishing itself from other coffee-serving venues in the US by taste, quality, and customer experience while popularizing darkly roasted coffee.[4] Since the 2000s, third wave coffee makers have targeted quality-minded coffee drinkers with hand-made coffee based on lighter roasts, while Starbucks nowadays uses automated espresso machines for efficiency and safety reasons.[4][5]

Starbucks first became profitable in Seattle in the early 1980s.[8] Despite an initial economic downturn with its expansion into the Midwest and British Columbia in the late 1980s,[9] the company experienced revitalized prosperity with its entry into California in the early 1990s.[10] The first Starbucks location outside North America opened in Tokyo in 1996; overseas properties now constitute almost one-third of its stores.[11] The company opened an average of two new locations daily between 1987 and 2007.[12]

On December 1, 2016, Howard Schultz announced he would resign as CEO effective April 2017 and would be replaced by Kevin Johnson. Johnson assumed the role of CEO on April 3, 2017.[13] (SOURCE: Wikipedia)