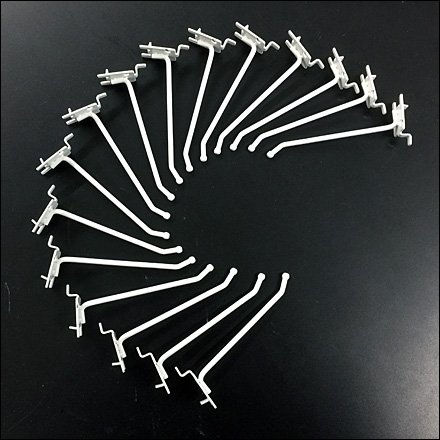 SCROLL DOWN FOR PHOTOS AND LINKS…
…to Spiral Store Fixtures

This Spiral Store Fixtures index page aggregates links
to all post and photos of retail merchandising, display, and outfitting
as well as deep Background courtesy of Wikipedia.

BACKSTORY: In mathematics, a spiral is a curve which emanates from a point, moving farther away as it revolves around the point.

Two major definitions of “spiral” in a respected American dictionary are:[1]

a. A curve on a plane that winds around a fixed center point at a continuously increasing or decreasing distance from the point.
b. A three-dimensional curve that turns around an axis at a constant or continuously varying distance while moving parallel to the axis; a helix.

Definition a describes a planar curve, that extends in both of the perpendicular directions within its plane; the groove on one side of a record closely approximates a plane spiral (and it is by the finite width and depth of the groove, but not by the wider spacing between than within tracks, that it falls short of being a perfect example); note that successive loops differ in diameter. In another example, the “center lines” of the arms of a spiral galaxy trace logarithmic spirals.

Definition b includes two kinds of 3-dimensional relatives of spirals:

In the side picture, the black curve at the bottom is an Archimedean spiral, while the green curve is a helix. The curve shown in red is a conic helix.

A two-dimensional spiral may be described most easily using polar coordinates, where the radius r is a monotonic continuous function of angle θ. The circle would be regarded as a degeneratecase (the function not being strictly monotonic, but rather constant).

For simple 3-d spirals, a third variable, h (height), is also a continuous, monotonic function of θ. For example, a conic helixmay be defined as a spiral on a conic surface, with the distance to the apex an exponential function of θ.

The helix and vortex can be viewed as a kind of three-dimensional spiral.

For a helix with thickness, see spring (math).

A rhumb line (also known as a loxodrome or “spherical spiral”) is the curve on a sphere traced by a ship with constant bearing(e.g., travelling from one pole to the other while keeping a fixed angle with respect to the meridians). The loxodrome has an infinite number of revolutions, with the separation between them decreasing as the curve approaches either of the poles, unlike an Archimedean spiral which maintains uniform line-spacing regardless of radius.

The study of spirals in nature has a long history. Christopher Wren observed that many shells form a logarithmic spiral; Jan Swammerdam observed the common mathematical characteristics of a wide range of shells from Helix to Spirula; and Henry Nottidge Moseley described the mathematics of univalve shells. D’Arcy Wentworth Thompson‘s On Growth and Form gives extensive treatment to these spirals. He describes how shells are formed by rotating a closed curve around a fixed axis, the shape of the curve remains fixed but its size grows in a geometric progression. In some shell such as Nautilus and ammonites the generating curve revolves in a plane perpendicular to the axis and the shell will form a planar discoid shape. In others it follows a skew path forming a helico-spiral pattern. Thompson also studied spirals occurring in horns, teeth, claws and plants.[2]

A model for the pattern of florets in the head of a sunflower was proposed by H Vogel. This has the form

where n is the index number of the floret and c is a constant scaling factor, and is a form of Fermat’s spiral. The angle 137.5° is the golden angle which is related to the golden ratio and gives a close packing of florets.[3]

Spirals in plants and animals are frequently described as whorls. This is also the name given to spiral shaped fingerprints. (SOURCE: Wikipedia)

For all Spiral Store Fixtures resources…