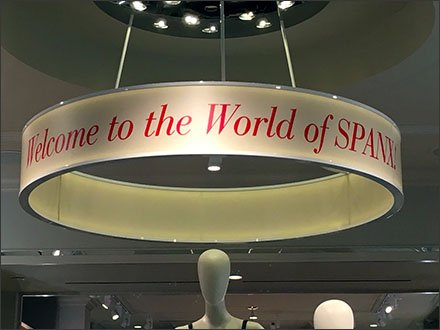 SCROLL DOWN FOR PHOTOS AND LINKS…
…to Spanx Retail Fixtures

This Spanx Retail Fixtures index page aggregates links
to all post and photos of retail merchandising, display, and outfitting
as well as deep Background courtesy of Wikipedia.

BACKSTORY: Spanx, Inc. is an American underwear maker focusing on shaping briefs and leggings, founded in Atlanta, Georgia. The company manufactures mainly pantyhose and other underwear for women and, since 2010, produces male underwear as well. Spanx specializes in foundation garmentsintended to make people look thinner than they actually are.[1]

Following her graduation from Florida State University (FSU), Walt Disney World Resort employee Sara Blakely joined local stationery company Danka to sell fax machines door-to-door.[2] In the heat and humidity of Florida, she tried unsuccessfully to find pantyhose that didn’t have seamed toes and that didn’t roll up the leg after she cut them.[3]

Investing her life-savings of $5,000, she moved to Atlanta at age 27, where she researched and developed a hosiery concept predominantly on her own. The creation of the initial product prototype was completed over the course of a year and involved Blakely, her mother, and her friends personally testing the garments. This was innovative at the time, as the industry did not test products with people. Blakely’s research revealed that the industry had previously been using the same size waistband for all hosiery products to cut costs, and a rubber cord was inserted into the waistband. For her product development, Blakely created different waistbands to suit different-sized consumers.[4]

Blakely finalized her patent application with a patent attorney prior to her submission to the United States Patent and Trademark Office (USPTO). Following the submission of the online application, Blakely then worked on the packaging of her product, which she intended to color red for the purpose of boldness, as the other brands at the time were all packaged in “beige, white or grey”. Additionally, Blakely used three animated images of different-looking women, which was also novel at the time, when other brands displayed the same type of female model. [4]

Requiring a brand name for her product, Blakely was frustrated after failing to settle on a title that satisfied her, after a year and a half of ideation. At the time she finalized her brand name, Blakely knew that Coca-Cola and Kodak were the two most recognized brand names in the world, and that both contained a strong “k” sound. Blakely read that the founder of Kodak liked the sound so much that he used it as the beginning and end of his brand name and then proceeded to create a functioning word based upon this foundation. The name “Spanks” eventually came to Blakely, and she decided to replace the “ks” with an “x”, as her research had shown that constructed names were more successful and were easier to register as a trademark. Blakely then used her credit card to purchase the “Spanx” trademark on the USPTO website for US$350.[4]

In 2000, Blakely launched the Spanx brand from her apartment,[5] undertaking all initial calls and marketing herself. Her boyfriend at the time, a healthcare consultant, later resigned from his job and joined Blakely in the running of the nascent business.[4]

Blakely previously conducted a meeting with a representative of the Neiman Marcus Group, at which she changed into the product in the ladies restroom in the presence of the Neiman Marcus buyer to prove the benefits of her innovation.[6] Blakely’s product was sold in seven Neiman Marcus stores as a result of the meeting;[4] Bloomingdales, Saks, and Bergdorf Goodman soon followed.[7]

The brand produces lines with names such as “Bod-a-Bing!” and “Hide & Sleek”. In 2009, Spanx launched a deluxe collection called “Haute Contour” that included items such as a lace thong with waist reinforcements and color options like pink. Following the release, Blakely explained: “I said, ‘Let’s make it beautiful … like shapewear in disguise,'”[12]

Spanx started manufacturing body-shaping undergarments for men (“Spanx for Men – MANX”) in 2010,[13][14] and then introduced denim to an expanding Spanx product line for the brand’s “Fall” range in March 2014.[9] (SOURCE: Wikipedia)

For all Spanx Retail Fixtures resources…