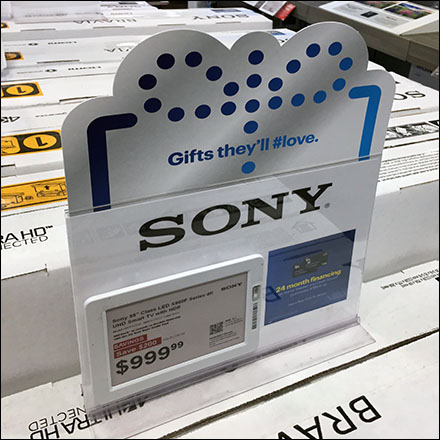 SCROLL DOWN FOR PHOTOS AND LINKS…
…to Sony Retail Merchandising Displays

This Sony Retail Merchandising Displays index page aggregates links
to all post and photos of retail merchandising, display, and outfitting
as well as deep Background courtesy of Wikipedia.

BACKSTORY: Sony Corporation (ソニー株式会社, Sonī Kabushiki Kaisha, /ˈsoʊni/ SOH-nee, commonly known as Sony and stylized as SONY) is a Japanese multinational conglomerate corporation headquartered in Kōnan, Minato, Tokyo.[8][1] Its diversified business includes consumer and professional electronics, semiconductors, gaming, entertainment and financial services.[9] The company owns the largest music entertainment business in the world,[10] the largest video game console business and one of the largest video game publishingbusinesses, and is one of the leading manufacturers of electronic products for the consumer and professional markets, and a leading player in the film and television entertainment industry.[11][better source needed] Sony was ranked 97th on the 2018 Fortune Global 500list.[12]

Sony is among the semiconductor sales leaders[16] and as of 2015, the fifth-largest television manufacturer in the world after Samsung Electronics, LG Electronics, TCL and Hisense, although it is the world’s largest player in the premium TV market, a market for a television of at least 55-inch in size, with a price higher than $2,500.[17][18]

Sony has a weak tie to the Sumitomo Mitsui Financial Group (SMFG) corporate group, the successor to the Mitsui group.[21] (SOURCE: Wikipedia)