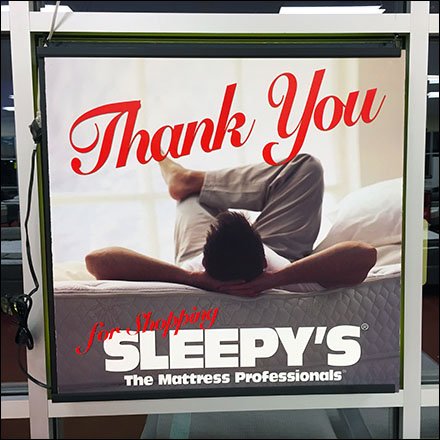 SCROLL DOWN FOR PHOTOS AND LINKS…
…to Sleepy’s Retail Fixtures

This Sleepy’s Retail Fixtures index page aggregates links
to all post and photos of tretail merchandising, display, and outfitting
as well as deep Background courtesy of Wikipedia.

Sleepy’s was a retail mattress chain with over 1,000 stores, primarily situated in the northeastern United States. The company was founded in New York City in 1931.[1] Sleepy’s was acquired by Mattress Firm in December 2015 and all stores were rebranded under the Mattress Firm name in 2016 and 2017. Sleepy’s currently exists as an online retailer.

David Acker, Harry’s son, became the president of Sleepy’s in 2001. In 2002, Sleepy’s built a new 211,000-square-foot (19,600 m2) warehouse in Robbinsville, NJ.[citation needed] Mattress Firm sleep chains locations in Connecticut and Massachusetts were acquired in 2003, and in 2007 Sleepy’s acquired the Rockaway Bedding chain adding 200 stores.[citation needed] In the summer of 2009 Sleepy’s moved its headquarters and New York distribution facility to a newly constructed 500,000-square-foot (46,000 m2) building in Hicksville, New York.[2] In 2009, Sleepy’s acquired the assets of Dial-A-Mattress International and 1-800-Mattress Corp.,[3] including its two domain names, and a year later the Connecticut mattress specialty chain Better Bedding.[4] In 2013, Sleepy’s expanded into the Chicago market.[5] In October 2014 Sleepy’s opened its 1,000th store.[6]

In 2004, Sleepy’s resolved a lawsuit filed by the New Jersey division of consumer affairs. The lawsuit alleged that Sleepy’s misled consumers regarding their exchange policy, customer refunds, and advertisements. There were also questions about delivery of faulty merchandise and failure of delivery. Sleepy’s agreed to pay $750,000 in costs and restitution to reach settlement. In addition to the payment the company agreed to clearer advertising, issuing refunds more willingly and improving customer service.[14]

In 2007, Sleepys agreed to pay $200,000 to resolve complaints and settle deceptive sales charges in NY. As part of the settlement, Sleepy’s agreed to pay a total of $200,000, which includes restitution to consumers and penalties, as well as a commitment to new policies and procedures to achieve full compliance with local and State laws. The settlement marked a conclusion to the agency’s extensive investigation into approximately 300 consumer complaints filed over the past three years through DCA or referred to the Department by other agencies including the New York State Attorney General’s Office and the Better Business Bureau.[15]

In April 2011 Sleepy’s was cleared by Connecticut Attorney General George Jepsen of charges regarding complaints of bed bugs infestations and accusations of re-selling used mattresses.[16]

EDITOR’S NOTE: Sleepy’s Retail Fixtures
Topmost posts may be scheduled but not yet live.
Please click further down the list if necessary.