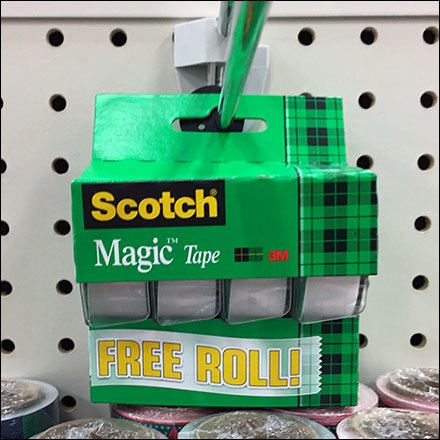 SCROLL DOWN FOR PHOTOS AND LINKS…
…to Scotch Retail Fixtures

This Scotch Retail Fixtures index page aggregates links
to all post and photos of tretail merchandising, display, and outfitting
as well as deep Background courtesy of Wikipedia.

BACKSTORY: Scotch Tape is a brand name used for pressure-sensitive tapes manufactured by 3M as part of the company’s Scotch brand. Their magnetic recording tape products were also sold under the Scotch brand.

The precursor to the current tapes was developed in the 1930s in St. Paul, Minnesota by Richard Drew to seal a then-new transparent material known as cellophane.[1]

Although it is a trademark and a brand name, Scotch tape is sometimes used as a generic term.[citation needed] The Scotch brand includes many different constructions (backings, adhesives, etc.) and colors of tape.

The use of the term Scotch in the name was a pejorative meaning “stingy” in the 1920s and 1930s. The brand name Scotch came about around 1925 while Richard Drew was testing his first masking tape to determine how much adhesive he needed to add. The bodyshop painter became frustrated with the sample masking tape and exclaimed, “Take this tape back to those Scotch bosses of yours and tell them to put more adhesive on it!”[2][3] The name was soon applied to the entire line of 3M tapes.

Scotty McTape, a kilt-wearing cartoon boy, was the brand’s mascot for two decades, first appearing in 1944.[4] The familiar tartan design, a take on the well-known Wallace tartan, was introduced in 1945.[4]

The Scotch brand and Scotch Tape are registered trademarks of 3M. Besides using Scotch as a prefix in its brand names (Scotchgard, Scotchlite, and Scotch-Brite), the company also used the Scotch name for its (mainly professional) audiovisual magnetic tape products, until the early 1990s when the tapes were branded solely with the 3M logo.[5] In 1996, 3M exited the magnetic tape business, selling its assets to Quantegy (which is a spin-off of Ampex).

In 1953, Soviet scientists showed that triboluminescence caused by peeling a roll of an unidentified Scotch brand tape in a vacuum can produce X-rays.[6] In 2008, American scientists performed an experiment that showed the rays can be strong enough to leave an X-ray image of a finger on photographic paper.[7]  (SOURCE: Wikipedia)

BACKSTORY: The 3M Company, formerly known as the Minnesota Mining and Manufacturing Company, is an American multinational conglomerate corporation based in Maplewood, Minnesota, a suburb of St. Paul.[2]

With $30 billion in annual sales, 3M employs 88,000 people worldwide and produces more than 55,000 products, including: adhesives, abrasives, laminates, passive fire protection, dental and orthodontic products, electronic materials, medical products, car-care products (sun films, polish, wax, car shampoo, treatment for the exterior, interior and the under chassis rust protection),[3] electronic circuits, and optical films.[4] 3M has operations in more than 65 countries including 29 international companies with manufacturing operations and 35 companies with laboratories. 3M products are available for purchase through distributors and retailers, and online directly from the company.

Five businessmen founded 3M in Two Harbors, Minnesota, in 1902.[5] Originally a mining venture, the goal was to mine corundum, but this failed because the mine’s mineral holdings were anorthosite, which had no commercial value.[5] Co-founder John Dwan solicited funds in exchange for stock and Edgar Ober and Lucius Ordway took over the company in 1905.[5] The company moved to Duluth and began research and producing sandpaperproducts.[5] William L. McKnight, later a key executive, joined the company in 1907, and A. G. Bush joined in 1909.[5] 3M finally became financially stable in 1916 and was able to pay dividends.[5] (SOURCE: Wikipedia)