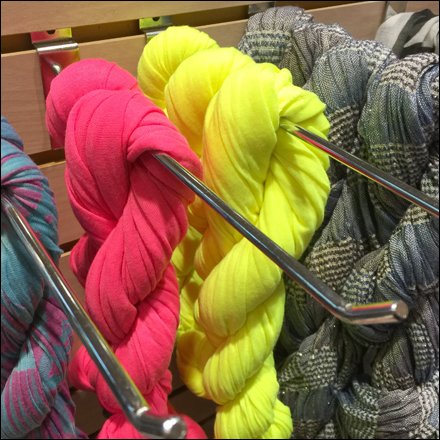 SCROLL DOWN FOR PHOTOS AND LINKS…
…to Scarf Braid Visual Merchandising

This Scarf Braid Visual Merchandising index page aggregates links
to all post and photos of retail merchandising, display, and outfitting
as well as deep Background courtesy of Wikipedia.

BACKSTORY: A braid (also referred to as a plait) is a complex structure or pattern formed by interlacing two or more strands of flexible material such as textile yarns, wire, or hair.[1] The materials used have depended on the indigenous plants and animals available in the local area. Braids have been made for thousands of years,[2] in many different cultures around the world, for a variety of uses.

The most simple and common version is a flat, solid, three-stranded structure. More complex patterns can be constructed from an arbitrary number of strands to create a wider range of structures (such as a fishtail braid, a five-stranded braid, rope braid, a French braid and a waterfall braid). The structure is usually long and narrow with each component strand functionally equivalent in zigzagging forward through the overlapping mass of the others. It can be compared with the process of weaving, which usually involves two separate perpendicular groups of strands (warp and weft). (SOURCE: Wikipedia)

For all Scarf-Related Indexes see…