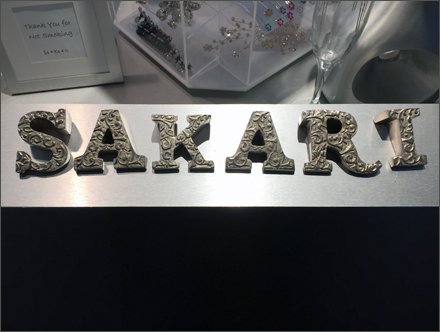 This Sakari Salon and Spa Retail Fixtures index page aggregates links
to all post and photos of tretail merchandising, display, and outfitting
as well as deep Background courtesy of Wikipedia.

BACKSTORY: Sakari Salon and Spa …to be one’s best At Sakari we strive to represent a new generation of salons and spas. We have an imaginative design team, invigorating spa specialists, and we use only the best products that are leading the industry. Sakari offers superior Goldwell coloring services and uses organic products in our spa services. We take the time to help you create your own personal image, with one goal in mind, to help you be your best. (SOURCE: Sakari)

BACKSTORY: A spa is a location where mineral-rich spring water (and sometimes seawater) is used to give medicinal baths. Spa towns or spa resorts (including hot springs resorts) typically offer various health treatments, which are also known as balneotherapy. The belief in the curative powers of mineral waters goes back to prehistoric times. Such practices have been popular worldwide, but are especially widespread in Europe and Japan. Day spas are also quite popular, and offer various personal care treatments.

The term is derived from the name of the town of Spa, Belgium, whose name is known back from Roman times, when the location was called Aquae Spadanae,[1] sometimes incorrectly connected to the Latin word spargere meaning to scatter, sprinkle or moisten.[2] The word spa itself denotes “fountain”. Some experts also suggest that the word “spa” originated from the name of the Belgian town named Spa where a curative natural spring was discovered in the 14th century.[3]

Since medieval times, illnesses caused by iron deficiency were treated by drinking chalybeate (iron-bearing) spring water (in 1326, the ironmaster Collin le Loup claimed a cure,[4] when the spring was called Espa, a Walloon word for “fountain”[4]).

In 16th-century England, the old Roman ideas of medicinal bathing were revived at towns like Bath (not the source of the word bath), and in 1596 William Slingsby who had been to the Belgian town (which he called Spaw) discovered a chalybeate spring in Yorkshire. He built an enclosed well at what became known as Harrogate, the first resort in England for drinking medicinal waters, then in 1596 Dr Timothy Bright after discovering a second well called the resort The English Spaw, beginning the use of the word Spa as a generic description.

It is commonly claimed, in a commercial context, that the word is an acronym of various Latin phrases such as “Salus Per Aquam” or “Sanitas Per Aquam” meaning “health through water”.[5] This is very unlikely: the derivation does not appear before the early 21st century and is probably a backronym as there is no evidence of acronyms passing into the language before the 20th century;[6]nor does it match the known Roman name for the location.[7]

Spa therapies have existed since the classical times when taking bath with water was considered as a popular means to treat illnesses.[3] The practice of traveling to hot or cold springs in hopes of effecting a cure of some ailment dates back to pre-historic times. Archaeological investigations near hot springs in France and Czech Republic revealed Bronze Age weapons and offerings. In Great Britain, ancient legend credited early Celtic kings with the discovery of the hot springs in Bath, England.

Many people around the world believed that bathing in a particular spring, well, or river resulted in physical and spiritual purification. Forms of ritual purification existed among the Native Americans, Babylonians, Egyptians, Greeks, and Romans. Today, ritual purification through water can be found in the religious ceremonies of Jews, Muslims, Christians, Buddhists, and Hindus. These ceremonies reflect the ancient belief in the healing and purifying properties of water. Complex bathing rituals were also practiced in ancient Egypt, in pre-historic cities of the Indus Valley, and in Aegean civilizations. Most often these ancient people did little building construction around the water, and what they did construct was very temporary in nature.[8] (SOURCE: Wikipedia)

How To Visually Brand A Spa And Hair Salon

EDITOR’S NOTE: Sakari Salon and Spa
Topmost posts may be scheduled but not yet live.
Please click further down the list if necessary.

For Sakari Salon and Spa Retail Fixtures by title see…

For all Sakari Salon and Spa Retail Fixtures resources…