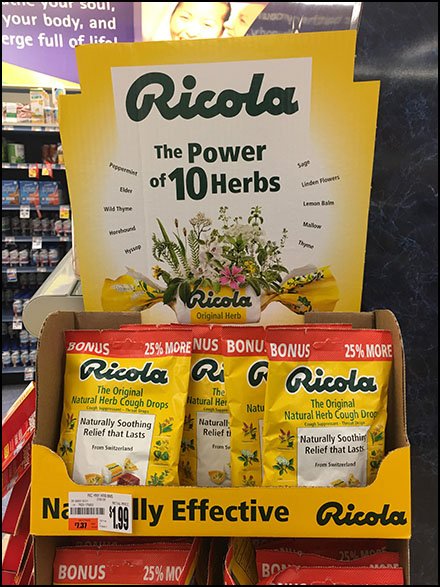 SCROLL DOWN FOR PHOTOS AND LINKS…
…to Ricola Merchandising

This Ricola Merchandising index page aggregates links
to all post and photos of retail merchandising, display, and outfitting
as well as deep Background courtesy of Wikipedia.

BACKSTORY: Ricola Ltd./Ricola AG is a Swiss manufacturer of cough drops and breath mints. All their products include natural herbal ingredientsexclusively cultivated on Swiss soil without any use of pesticides, insecticides or herbicides.[1][2] The head office of Ricola is located in Laufen, Basel-Country.[3]

Ricola listed sales of 297.3 million of Swiss francs in (2012) and employs 400 workers. Around 200 independent produce companies in the surrounding area service Ricola. In order to obtain enough herbs for the production of its herbal drops, the firm contracts over 100 self-managed farms in the Valais, Emmental, Val Poschiavo and at the southern foot of the Jura Mountains, in central Switzerland, and in Ticino. Ricola is known for its commercials featuring Heidi (Ramona Pringle) depicting mountaineers shouting “Ri-co-la!” and blowing through a large Alphorn.

icola began in 1930 when Emil Wilhelm Richterich and Daniel Ruoss Sr. established Confiseriefabrik Richterich & Co. Laufen after the purchase of a small bakery in Laufen, just outside Basel. Under Richterich, the bakery specialized in confectionery such as “Fünfermocken,” a sweet which was similar to caramel. In 1940 Richterich created Ricola’s Swiss Herbal Sweet incorporating a blend of 13 herbs. In the 1950s the sweet became appreciated for its ability to be dissolved in boiling water, creating an aromatic herbal tea or tisane, which inspired Richterich to create a Ricola Herbal Tea a few years later.[4]

In 1967, Emil Richterich and his sons Hans Peter and Alfred renamed the company Ricola, an abbreviation of Richterich & Compagnie Laufen. Export began in the 1970s, introducing Ricola’s products to foreign markets. At the end of the decade, Ricola moved to a new purpose-built factory in the vicinity of Laufen, where its headquarters are still located.[4]

In 1976, after extensive research on sugar-free confectionery, Ricola launched Switzerland’s first chewable, sugarless herbal sweet. Ricola first started to advertise its products on television in the 1980s, an era that saw increased awareness of the need for good dental hygiene, increasing the demand for sugar-free products such as the ones that Ricola offered. In 1988 the company started packaging their products in small boxes.[4]

The company is now managed by Felix Richterich, son of Hans Peter and grandson of the founder. Today, Ricola exports to over 50 countries in Asia, North America and Europe.[5] (SOURCE: Wikipedia)

For Ricola Merchandising by title see…

For all Ricola Merchandising resources…