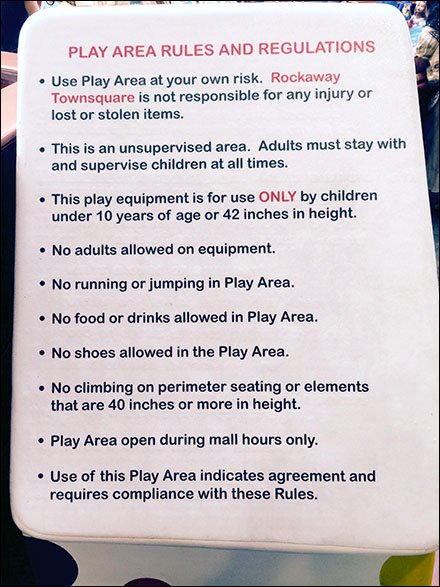 Kidgets® Playground Rules At The Mall

This Retail Playground And Retail Play Area index page aggregates links
to all post and photos of retail merchandising, display, and outfitting
as well as deep Background courtesy of Wikipedia.

BACKSTORY: A playground, playpark, or play area is a place specifically designed to enable children to play there. It is typically outdoors. While a playground is usually designed for children, some target other age groups. Berlin’s Preußenpark for example is designed for people aged 70 or higher.[citation needed] A playground might exclude children below a certain age.

Modern playgrounds often have recreational equipment such as the seesaw, merry-go-round, swingset, slide, jungle gym, chin-up bars, sandbox, spring rider, trapeze rings, playhouses, and mazes, many of which help children develop physical coordination, strength, and flexibility, as well as providing recreation and enjoyment and supporting social and emotional development. Common in modern playgrounds are play structures that link many different pieces of equipment.

Playgrounds often also have facilities for playing informal games of adult sports, such as a baseball diamond, a skating arena, a basketball court, or a tether ball.

Public playground equipment refers to equipment intended for use in the play areas of parks, schools, childcare facilities, institutions, multiple family dwellings, restaurants, resorts, and recreational developments, and other areas of public use.

In some parts of the United States, the term tot lot may be used.[1]

A type of playground called a playscape is designed to provide a safe environment for play in a natural setting.

Playground design is influenced by the intended purpose and audience. Separate play areas might be offered to accommodate very young children. Single, large, open parks tend to not to be used by older schoolgirls or less aggressive children, because there is little opportunity for them to escape more aggressive children.[16] By contrast, a park that offers multiple play areas is used equally by boys and girls.

Professionals recognize that the social skills that children develop on the playground often become lifelong skill sets that are carried forward into their adulthood. Independent research concludes that playgrounds are among the most important environments for children outside the home. Most forms of play are essential for healthy development, but free, spontaneous play—the kind that occurs on playgrounds—is the most beneficial type of play. (SOURCE: Wikipedia)

Kidgets® Playground Rules At The Mall