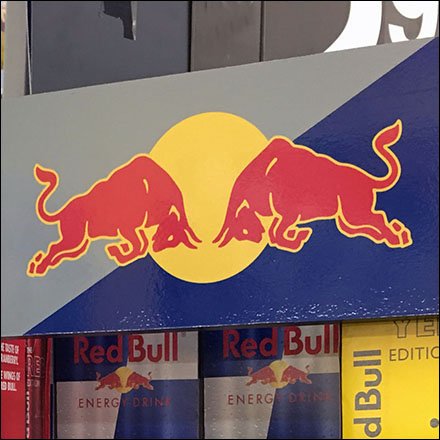 SCROLL DOWN FOR PHOTOS AND LINKS…
…to Red Bull Retail Fixtures

This Red Bull Retail Fixtures index page aggregates links
to all post and photos of retail merchandising, display, and outfitting
as well as deep Background courtesy of Wikipedia.

Austrian entrepreneur Dietrich Mateschitz was inspired by an existing energy drink named Krating Daeng, which was first introduced and sold in Thailand by Chaleo Yoovidhya. He took this idea, modified the ingredients to suit the tastes of Westerners,[5] and, in partnership with Chaleo, founded Red Bull GmbH in 1987 in Chakkapong, Thailand. In Thai, daeng means red, and krating is the word used for a large bovine animal called a gaur in formal English. In colloquial English, a gaur is more commonly called a bull.

Red Bull is sold in a tall and slim blue-silver can, while Krating Daeng is in a shorter gold can.[6] The two are different products, produced separately. The Red Bull company slogan is “Red Bull gives you wings”.[7] Rather than following a traditional approach to mass marketing, Red Bull has generated awareness and created a seductive ‘brand myth’[8][9] through proprietary extreme sport event series such as Red Bull Cliff Diving World Series, Red Bull Air Race, Red Bull Crashed Ice and stand-out stunts such as the Stratos space diving project.[10]

Energy drinks have been associated with health risks, such as masking the effects of intoxication when consumed with alcohol,[12] and excessive or repeated consumption can lead to cardiac and psychiatric conditions.[13][14] However, the European Food Safety Authority (EFSA) concluded that an adequate consumption of Red Bull and other popular energy drinks is safe and that the amount of caffeine in standard Red Bull cans is unlikely to interact adversely with other typical constituents of energy drinks or with alcohol.[15] Energy drinks have the effects that caffeine and sugar provide, but there is no distinct evidence that the wide variety of other ingredients has any effect.[16]

Red Bull contains caffeine, taurine, B vitamins (B3, B5, B6, B12), sucrose, and glucose.[24] To produce Red Bull Sugarfree, sugars sucrose and glucose have been replaced by the sweeteners acesulfame K and aspartame/sucralose.[25] (SOURCE: Wikipedia)