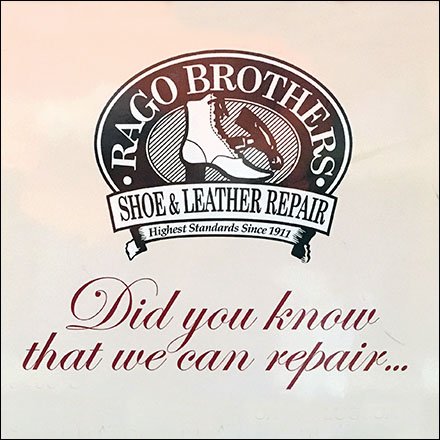 SCROLL DOWN FOR PHOTOS AND LINKS…
…to Rago Brothers Retail Fixtures

This Rago Brothers Retail Fixtures index page aggregates links
to all post and photos of the firm’s retail merchandising and outfitting
as well as deep Background courtesy of Wikipedia.

RAGO BROTHERS BACKSTORY: In 1911, Thomas “Nicolas” Rago and his brother came to Morristown, New Jersey from Southern Italy and opened the original Rago Brothers Shoe Repair Shop. They were among many immigrant families who made their homes and businesses here. It was a bustling neighborhood , brimming with activity day and night. At that time, Rago Brothers was one of two dozen shoe repair shops in Morristown. Throughout the years, other shops moved or closed, while Rago Brothers remained. Thomas Sr. (“Tommy”) joined his father as a boy in the 1940’s, and kept the business strong. He brought on the third generation with his sons Thomas (Tom) and Anthony (Tony) – who joined him in the late seventies and early eighties. Together they carry on the family tradition of quality, service, hard work, and dedication to their customers. (SOURCE: Rago Brothers). See the famous designer names who entrust their leatherwork repair and warranties to this time-tested institution because of the Rago Brothers Difference.

For all Rago Brothers resources see…