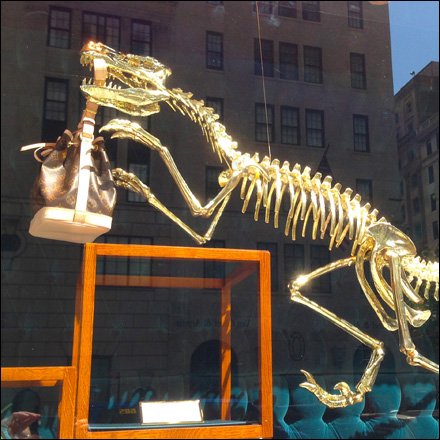 SCROLL DOWN FOR PHOTOS AND LINKS…
…to Prehistoric Retail Fixtures

This Prehistoric Retail Fixtures index page aggregates links
to all post and photos of the brand’s retail merchandising and outfitting.

BACKSTORY: Prehistory is the period of human activity between the use of the first stone tools ~3.3 million years ago and the invention of writing systems, the earliest of which appeared ~5300 years ago.

Sumer in Mesopotamia, the Indus valley civilisation and ancient Egypt were the first civilisations to develop their own scripts, and to keep historical records; this took place already during the early Bronze Age. Neighbouring civilizations were the first to follow. Most other civilizations reached the end of prehistory during the Iron Age. The three-age system of division of prehistory into the Stone Age, followed by the Bronze Age and Iron Age, remains in use for much of Eurasia and North Africa, but is not generally used in those parts of the world where the working of hard metals arrived abruptly with contact with Eurasian cultures, such as the Americas, Oceania, Australasia and much of Sub-Saharan Africa. These areas also, with some exceptions in Pre-Columbian civilizations in the Americas, did not develop complex writing systems before the arrival of Eurasians, and their prehistory reaches into relatively recent periods.

The beginning of written materials (and so the beginning of local “historic times”) varies; in many cultures, especially outside Eurasia, it follows conquest by a culture with writing, and often the earliest written sources on pre-literate cultures come from their literate neighbours. The period when a culture is written about by others, but has not developed its own writing is often known as the protohistory of the culture. By definition, there are no written records from human prehistory, so dating of prehistoric materials is crucial. Clear techniques for dating were not well-developed until the 19th century.[1]

This article is concerned with human prehistory as defined here above. There are separate articles for the overall history of the Earth and the history of life before humans. However, for the human race as a whole, prehistory ends when recorded history begins with the accounts of the ancient world around the 4th millennium BC, and coincides with the invention of writing. (SOURCE: Wikipedia)

BACKSTORY: Dinosaurs are a diverse group of reptiles of the clade Dinosauria that first appeared during the Triassic period. Although the exact origin and timing of the evolution of dinosaurs is the subject of active research,[1] the current scientific consensus places their origin between 231 and 243 million years ago.[2] They became the dominant terrestrial vertebrates after the Triassic–Jurassic extinction event 201 million years ago. Their dominance continued through the Jurassic and Cretaceous periods and ended when the Cretaceous–Paleogene extinction event led to the extinction of most dinosaur groups 66 million years ago.

Dinosaurs are a varied group of animals from taxonomic, morphological and ecological standpoints. Birds, at over 10,000 living species,[6] are the most diverse group of vertebrates besides perciform fish.[7] Using fossil evidence, paleontologists have identified over 500 distinct genera[8] and more than 1,000 different species of non-avian dinosaurs.[9] Dinosaurs are represented on every continent by both extant species (birds) and fossil remains.[10] Through the first half of the 20th century, before birds were recognized to be dinosaurs, most of the scientific community believed dinosaurs to have been sluggish and cold-blooded. Most research conducted since the 1970s, however, has indicated that all dinosaurs were active animals with elevated metabolisms and numerous adaptations for social interaction. Some are herbivorous, others carnivorous. Evidence suggests that egg laying and nest building are additional traits shared by all dinosaurs.

While dinosaurs were ancestrally bipedal, many extinct groups included quadrupedal species, and some were able to shift between these stances. Elaborate display structures such as horns or crests are common to all dinosaur groups, and some extinct groups developed skeletal modifications such as bony armor and spines. While the dinosaurs’ modern-day surviving avian lineage (birds) are generally small due to the constraints of flight, many prehistoric dinosaurs (non-avian and avian) were large-bodied—the largest sauropod dinosaurs are estimated to have reached lengths of 39.7 meters (130 feet)[11] and heights of 18 meters (59 feet)[12] and were the largest land animals of all time. Still, the idea that non-avian dinosaurs were uniformly gigantic is a misconception based in part on preservation bias, as large, sturdy bones are more likely to last until they are fossilized. Many dinosaurs were quite small: Xixianykus, for example, was only about 50 cm (20 in) long.

Since the first dinosaur fossils were recognized in the early 19th century, mounted fossil dinosaur skeletons have been major attractions at museums around the world, and dinosaurs have become an enduring part of world culture. The large sizes of some dinosaur groups, as well as their seemingly monstrous and fantastic nature, have ensured dinosaurs’ regular appearance in best-selling books and films, such as Jurassic Park. Persistent public enthusiasm for the animals has resulted in significant funding for dinosaur science, and new discoveries are regularly covered by the media. (SOURCE: Wikipedia)

For all Prehistoric Retail Fixtures resources at …