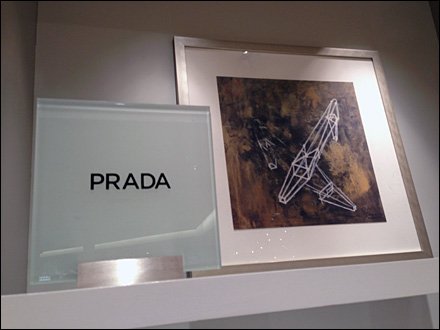 SCROLL DOWN FOR PHOTOS AND LINKS…
…to Prada Retail Fixtures

This Prada Retail Fixtures index page aggregates links
to all post and photos of the brand’s retail merchandising and outfitting
as well as deep Background courtesy of Wikipedia.

The company was started in 1913 by Mario Prada and his brother Martino as a leather goods shop – Fratelli Prada (English: Prada Brothers) – in Milan, Italy.[4][5] Initially, the shop sold leather goods and imported English steamer trunks and handbags.

Mario Prada did not believe that women should have a role in business, and so he prevented female family members from entering into his company. Ironically, Mario’s son harbored no interest in the business, so it was his daughter Luisa Prada who took the helm of Prada as his successor, and ran it for almost twenty years. Her own daughter, Miuccia Prada, joined the company in 1970, eventually taking over for her mother in 1978.

Miuccia began making waterproof backpacks out of Pocone.[4] She met Patrizio Bertelli in 1977, an Italian who had begun his own leather goods business at the age of 17, and he joined the company soon after. He advised Miuccia—and she followed the advice—on better decisions for the Prada company. It was his advice to discontinue importing English goods and to change the existing luggage.

Miuccia inherited the company in 1978 by which time sales were up to U.S. $450,000. With Bertelli alongside her as business manager, Miuccia was allowed time to implement her creativity in the company’s designs.[4] She would go on to incorporate her ideas into the house of Prada that would change it.[4]

She released her first set of backpacks and totes in 1979. They were made out of a tough military spec black nylon that her grandfather had used as coverings for steamer trunks. Initial success was not instant, as they were hard to sell due to the lack of advertising and high-prices, but the lines would go on to become her first commercial hit.

Next, Miuccia and Bertelli sought out wholesale accounts for the bags in upscale department stores and boutiques worldwide. In 1983, Prada opened a second boutique in the centre of the Galleria Vittorio Emanuele in Milan’s shopping heart, on the site of the previous historic “London House” emporium run by Felice Bellini from 1870 to the 1960s, reminiscent to the original shop, but with a sleek and modern contrast to it.

The next big release was a nylon tote. That same year, the house of Prada began expansion across continental Europe by opening locations in prominent shopping districts within Florence, Paris, Madrid, and New York City. A shoe line was also released in 1984. In 1985, Miuccia released the “classic Prada handbag” that became an overnight sensation. Although practical and sturdy, its sleek lines and craftsmanship exuded an offhand aura of luxury that has become the Prada signature.

In 1987, Miuccia and Bertelli married. Prada launched its women’s ready-to-wear collection in 1989, and the designs came to be known for their dropped waistlines and narrow belts. Prada’s popularity skyrocketed when the fashion world took notice of its clean lines, opulent fabrics, and basic colors.

The logo for the label was not as obvious a design element as those on bags from other prominent luxury brands such as Louis Vuitton. It tried to market its lack of prestigious appeal, including the apparel, was its image of “anti-status” or “reverse snobbery.”

Prada’s originality made it one of the most influential fashion houses,[4] and the brand became a premium status symbol in the 1990s.

Sales were reported at L 70 billion, or US$31.7 million, in 1998. Partrizio di Marco took charge of the growing business in the United States after working for the house in Asia. He was successful in having the Prada bags prominently displayed in department stores, so that they could become a hit with fashion editors. Prada’s continued success was attributed to its “working-class” theme which, Ginia Bellafante at The New York Times Magazine proclaimed, “was becoming chic in the high-tech, IPO-driven early 1990s.” Furthermore, now husband and wife, Miuccia and Bertelli led the Prada label on a cautious expansion, making products hard to come by.

In 1992, the high fashion brand Miu Miu, named after Miuccia’s nickname, launched. Miu Miu catered to younger consumers, such as celebrities. By 1993 Prada was awarded the Council of Fashion Designers of America award for accessories.[4]

Men’s ready-to-wear collections were launched in the mid-1990s. By 1994, sales were at US$210 million, with clothing sales accounting for 20% (expected to double in 1995). Prada won another award from the CFDA, in 1995 as a “designer of the year” 1996 witnessed the opening of the 18,000 ft² Prada boutique in Manhattan, New York, the largest in the chain at the time. By now the House of Prada operated in 40 locations worldwide, 20 of which were in Japan. The company owned eight factories and subcontracted work from 84 other manufacturers in Italy. Miuccia’s Prada and Bertelli company were merged to create Prapar B.V. in 1996. The name, however, was later changed to Prada B.V., and Patrizio Bertelli was named Chief Executive Officer of the Prada luxury company.

In 1997, Prada posted revenue of US$674 million. Another store in Milan opened that same year. According to the Wall Street Journal, Bertelli smashed the windows of the store a day before the opening, after he had become deeply unsatisfied with the set-up. Prada also acquired shares in the Gucci group, and later blamed Gucci for “aping his wife’s designs.” In June 1998, Bertelli gained 9.5% interests at US$260 million. Analysts began to speculate that he was attempting a take over of the Gucci group. The proposition seemed unlikely, however, because Prada was at the time still a small company and was in debt. Funding Universe states that “At the very least, Prada had a voice as one of Gucci’s largest shareholders (a 10 percent holding would be required for the right to request a seat on the board) and would stand to profit tidily should anyone try to take over Gucci.” However, Bertelli sold his shares to Moët-Hennessy • Louis Vuitton chairman Bernard Arnault in January 1998 for a profit of US$140 million. Arnault was in fact attempting a take over of Gucci. LVMH had been purchasing fashion companies for a while and already owned Dior, Givenchy, and other luxury brands. Gucci, however, managed to fend him off by selling a 45% stake to industrialist François Pinault, for US$3 billion. In 1998, the first Prada menswear boutique opened in Los Angeles.

Prada was determined to hold a leading portfolio of luxury brands, like the Gucci group and LVMH. Prada purchased 51% of Helmut Lang‘s company based in New York for US$40 million in March 1999. Lang’s company was worth about US$100 million. Months later, Prada paid US$105 million to have full control of Jil Sander A.G., a German-based company with annual revenue of US$100 million. The purchase gained Prada a foothold in Germany, and months later Jil Sander resigned as chairwoman of her namesake company. Church & Company, an English shoes maker, also came under the control of Prada, when Prada bought 83% of the company for US$170 million. A joint venture between Prada and the De Rigo group was also formed that year to produce Prada eyewear. In October 1999, Prada joined with LVMH and beat Gucci to buy a 51% stake in the Rome-based Fendi S.p.A. Prada’s share of the purchase (25.5%) was worth US$241.5 million out of the reported US$520 million total paid by both Prada and LVMH. Prada took on debts of Fendi, as the latter company was not doing well financially.

These acquisitions elevated Prada to the top of the luxury goods market in Europe. Revenue tripled from that of 1996, to L2 trillion. Despite apparent success, the company was still in debt.

The company’s merger and purchasing sprees slowed in the 2000s. However, the company signed a loose agreement with Azzedine Alaia. Skin care products in unit doses were introduced in the United States, Japan and Europe in 2000. A 30-day supply of cleansing lotion was marketed at the retail price of US$100. To help pay off debts of over US$850 million, the company planned on listing 30% of the company on the Milan Stock Exchange in June 2001. However, the offering slowed down after a decline in spending on luxury goods in the United States and Japan. In 2001, under the pressure of his bankers, Bertelli sold all of Prada’s 25.5% share in Fendi to LVMH. The sale raised only US$295 million.

By 2006, the Helmut Lang, Amy Fairclough, Ghee, and Jil Sander labels were sold. Jil Sander was sold to the private equity firm Change Capital Partners, which was headed by Luc Vandevelde, the chairman of Carrefour, while the Helmut Lang label is now owned by Japanese fashion company Link Theory. Prada is still recovering from the Fendi debt. More recently, a 45% stake of the Church & Company brand has been sold to Equinox.

The Prada Spring/Summer 2009 Ready-to-Wear fashion show, held on 23 September 2008 in Milan, got infamous coverage because of the fact that all the models on the catwalk were tottering[6][7]– several of them stumbled,[8] while two models fell down in front of the photographers and had to be helped by spectators to get up.[9] They removed their shoes in order to continue their walk.[10][11] One more model (Sigrid Agren) even had to stop and go back during the finale walk as she couldn’t manage walking in her high heels any longer.[12] Interviewed right after the show, one model declared: “I was having a panic attack, my hands were shaking. The heels were so high.”[13] The designer Miuccia Prada, on her side, did not blame the height of the shoes, but the silk little socks inside, which were slippery and moved inside of the shoes, preventing the models’ feet from having a correct grip on the sole.[14][15] Miuccia Prada also assured that the shoes sold in stores would have a lower heel,[16] and that the little socks would be sewn into the shoes in order to prevent further slips. But many fashionistas rightly claimed that the socks, once sewn into the shoes, would be non-washable and would quickly stink and become grey.[17] Consequently, the shoes have never been commercially sold.

According to Fortune, Betelli plans on increasing revenue of the company to US$5 billion by 2010.

Prada is the main buyer from the Turkish leather factory DESA, which was found guilty by the Turkish Supreme Court of illegally dismissing workers who joined a union.[18] The Clean Clothes Campaign, a labor rights organization based in Europe, has called on Prada to ensure that freedom of association is respected at the factory.[19] On January 30, 2013, Clean Clothes Campaignreported, “Trade Union Harassment Continues at Prada Supplier”.[20]

In 2005 an installation was made miles away from the nearest city in Texas. The name of the art piece is titled “Prada Marfa,” and it resembles a Prada boutique. The purpose of this was for the shop to disintegrate into its surroundings.

The brand was listed on the Hong Kong Stock Exchange to raise $2.14 billion, but failed to meet expectations reported by AAP on June 17, 2011[27] and Bloomberg.[28]

In July 2016, Prada clothing became available to purchase online for the first time through Net-a-Porter and MyTheresa. [30] (SOURCE: Wikipedia)

This Prada Retail Fixtures index page aggregates links
to all post and photos of the brand’s retail merchandising and outfitting
as well as deep Background courtesy of Wikipedia.

EDITOR’S NOTE: Prada Retail Fixtures
Topmost posts may be scheduled but not yet live.
Please click further down the list if necessary.