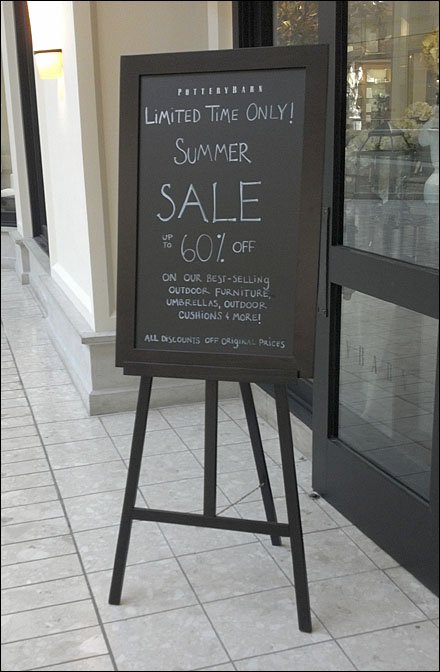 SCROLL DOWN FOR PHOTOS AND LINKS…
…to Pottery Barn Retail Fixtures

This Pottery Barn Retail Fixtures index page aggregates links
to all post and photos of the brand’s retail merchandising and outfitting.

Despite the name, they do not sell pottery.

The Pottery Barn was co-founded in 1949 by Paul Secon and his brother Morris in West Chelsea, Manhattan. Paul Secon discovered three barns full of pottery from the rural Alfred, N.Y. factory of designer Glidden Parker who had stored extras and seconds up the road from the business.[1] The Secon brothers built their chain up to seven stores. Paul sold his share in 1966 and Morris sold his to two outside partners in 1968.[2] It was bought by The Gap in 1983, and then by Williams-Sonoma in September 1986. Its mail-order catalog was first published in 1987.[3]

PBteen is the first home retailer to focus on teenagers in the 13–19 age range. It was launched in 2003. The first PB Teen store opened in Georgia in 2009, as well as in New York City and Chicago. The store now has a sub brand PB Dorm aimed at young people starting college life.[citation needed]

Pottery Barn is referenced a number of times in the US TV Show Friends, for example when Rachel buys furniture for Phoebe’s house (which she is staying in at the time), and claims that it’s all authenticly old furniture, it’s actually all from Pottery Barn. Another example is in TV show Seinfeld, Kramer talks with Jerry about how he is receiving too many catalogs from Pottery Barn. He saves the collected catalogs, takes them and throws them into the store. Also Sheldon Cooper references it often in the show The Big Bang Theory. A Pottery Barn retail store is seen situated next to Felix Ungar‘s Manhattan F.U. Enterprises office/studio in “The Odd Couple‘s” first season in 1970. Pottery Barn is referenced in the Broadway Musical Dear Evan Hansen, as a location where the title character works. He informs another character that he can get her and her family a discount in “overpriced home décor.”

Pottery Barn does not have a pottery barn rule store policy (“you break it, you buy it”). (SOURCE: Wikipedia)

EDITOR’S NOTE: Pottery Barn Retail Fixtures
Topmost posts may be scheduled but not yet live.
Please click further down the list if necessary.

EDITOR’S NOTE: Pottery Barn Retail Fixtures
Topmost posts may be scheduled but not yet live.
Please click further down the list if necessary.