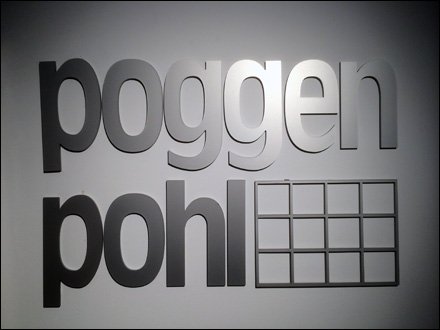 This Poggenpohl Retail Fixtures and Displays index page aggregates links
to all post and photos of the brand’s retail merchandising and outfitting
as well as deep Background courtesy of Wikipedia.

BACKSTORY: Poggenpohl is the German branch of the Swedish corporation Nobia specializing in kitchen cabinets. In Germany the facilities are located in Herford, Germany. Poggenpohl Möbelwerke claims to be the oldest kitchen brand in the world and one of the leading international brand names in kitchen design, known in more than 70 countries worldwide. 1993’s Foundations of Corporate Success describes it along with the luxurious manufacturer Bulthaup as dominant in “the high quality mass-production [kitchen furniture] sector.”[1]

In 1892, the brand Poggenpohl was established as a white lacquer furniture company founded by Freidemir Poggenpohl. Poggenpohl was successful with introducing ergonomic work-top heights, and storage innovations aimed at improving the kitchen.[2]

In 1923, Poggenpohl introduced a free-standing commodious cupboard called The Ideal which was also adopted by American cabinet manufacturer Kitchen Maid. The Poggenpohl cupboard was the forerunner of The Fitted Kitchen in the “Era of the Commodious Cupboard”.[3] The company continued to create new products and techniques; in 1928, it introduced the reform kitchen, a significant innovation in the industry, and in 1930, it created the ‘ten-layer polished lacquer technique’.[2]

In 1950, Poggenpohl was again an industry forerunner, as it launched the first unit kitchen, which has become the kitchen industry standard. These kitchens, created in response to what Poggenpohl saw as a desire for the modern in its customer base, offered a continuous counter-top workspace and wall units that matched.[4] As the product line evolved, they replaced the traditional wooden knob handles of the cabinetry with inset “strip” laminate handles.[4]

In 2009 Poggenpohl ranked first among German kitchen manufacturers – According to a survey undertaken by the Munich brand agency “Brand Rating” on behalf of the journal “Wirtschaftswoche”. Detailed in this survey are the Top 30 German manufacturers of luxury goods – Poggenpohl is an illustrious company, on par with Germany’s most prestigious name brands, like A. Lange & Söhne, Maybach, Glashütte and Porsche.

After being placed at the top of German luxury kitchen brands, premium kitchen manufacturer Poggenpohl from Herford, Westphalia, is the only German kitchen brand to be included in the standard work’s ‘Brands of the Century’ by Publisher Dr. Florian Langenscheidt.

For Poggenpohl Retail Fixtures and Displays by Title see…

For all Poggenpohl Retail Fixtures and Displays resources see…