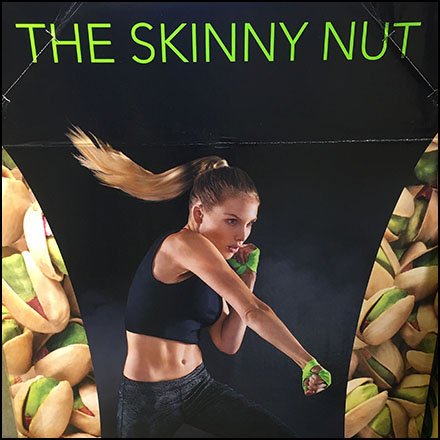 SCROLL DOWN FOR PHOTOS AND LINKS…
…to Pistachio Store Fixtures

This Pistachio Store Fixtures index page aggregates links
to all post and photos of retail merchandising, display, and outfitting
as well as deep Background courtesy of Wikipedia.

BACKSTORY: The pistachio (/pɪˈstɑːʃiˌoʊ, –ˈstæ-/,[1] Pistacia vera), a member of the cashew family, is a small tree originating from Central Asia and the Middle East.[2] The tree produces seeds that are widely consumed as food.

Pistacia vera often is confused with other species in the genus Pistacia that are also known as pistachio. These other species can be distinguished by their geographic distributions (in the wild) and their seeds which are much smaller and have a soft shell.

Archaeology shows that pistachio seeds were a common food as early as 6750 BC.[4] Pliny the Elder writes in his Natural History that pistacia, “well known among us”, was one of the trees unique to Syria, and that the seed was introduced into Italy by the Roman Proconsul in Syria, Lucius Vitellius the Elder (in office in 35 AD) and into Hispania at the same time by Flaccus Pompeius.[5] The early sixth-century manuscript De observatione ciborum (“On the observance of foods”) by Anthimus implies that pistacia remained well known in Europe in Late Antiquity. Archaeologists have found evidence from excavations at Jarmo in northeastern Iraq for the consumption of Atlantic pistachio.[4] The Hanging Gardens of Babylon were said to have contained pistachio trees during the reign of King Merodach-Baladan about 700 BC.[4]

The modern pistachio P. vera was first cultivated in Bronze Age Central Asia, where the earliest example is from Djarkutan, modern Uzbekistan.[6][7] It appears in Dioscurides as pistakia πιστάκια, recognizable as P. vera by its comparison to pine nuts.[8]

Additionally, remains of the Atlantic pistachio and pistachio seed along with nut-cracking tools were discovered by archaeologists at the Gesher Benot Ya’aqov site in Israel’s Hula Valley, dated to 780,000 years ago.[9] More recently, the pistachio has been cultivated commercially in many parts of the English-speaking world, in Australia, and in New Mexico[10] and California, of the United States, where it was introduced in 1854 as a garden tree.[11] David Fairchild of the United States Department of Agriculture introduced hardier cultivars collected in China to California in 1904 and 1905, but it was not promoted as a commercial crop until 1929.[10][12] Walter T. Swingle’s pistachios from Syria had already fruited well at Niles, California, by 1917.[13] (SOURCE: Wikipedia)

EDITOR’S NOTE: Pistachio Store Fixtures
Topmost posts may be scheduled but not yet live.
Please click further down the list if necessary.

For all Pistachio Store Fixtures resources…