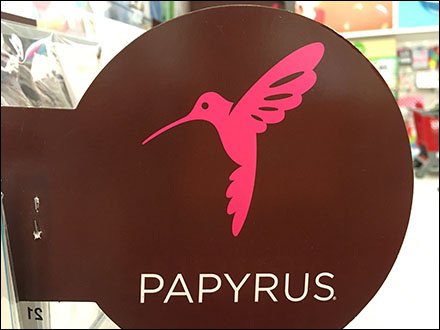 This Papyrus Store Fixtures and Merchandising index page aggregates links
to all post and photos of retail merchandising, display, and outfitting
as well as deep Background courtesy of Wikipedia.

BACKSTORY: PAPYRUS (styled in all capitals) is an American stationery and greeting card retailer that operates over 450 stores throughout the United States and Canada.[1][2][3] It is headquartered in Fairfield, California and is the flagship brand of the Schurman Retail Group.[4] The company sells a variety of products, including greeting cards, stationery, gift wrap, specialty gifts, jewelry, customized invitations, and other paper products.[5][6][7] It is one of the largest greeting card retailers in the United States.[8][9]

The first PAPYRUS retail shop was opened in 1973 by Margrit Schurman in Berkeley, California. It began as the retail wing of Schurman Fine Papers (now, the Schurman Retail Group).[10][11] The original store was opened for less than $1,000 and featured a variety of fine art-inspired greeting cards, postcards, and other Schurman paper products. Over the next five years, more PAPYRUS stores opened around the United States, and the company soon began selling franchises. In the 1980s, the company began domestic production of papyrus products.[10]

In 1991, Dominique Schurman became the CEO of Schurman Fine Papers and PAPYRUS. At that time, there were around 37 PAPYRUS stores nationwide and the company was bringing in $10 million per year. By 2005, the company operated around 146 PAPYRUS retail shops.[10][5] In 2009, PAPYRUS’ parent company, Schurman Retail Group, purchased all 346 American Greetings retail shops.[8] A number of these stores were eventually rebranded as PAPYRUS stores.[3] PAPYRUS currently operates 450 stores throughout the United States and Canada.[2]

PAPYRUS sells a variety of luxury paper products including a selection of stationery and greeting cards. The chain is perhaps best known for its high-end greeting cards that often incorporate items like buttons, fabric, leather, zippers, glitter, and other embellishments.[1] The stores also offer products like journals, note cards, gift wrap, customized invitations, and more.[5][6][7] Through the NIQUEA.D brand, PAPYRUS sells a selection of gifts, jewelry, and other fashion accessories. Other brands that can be found in PAPYRUS stores include American Greetings and Carlton Cards. The PAPYRUS logo is a distinct pink hummingbird and can be found on a variety of PAPYRUS products.[1][12] (SOURCE: Wikipedia)

Compare with other Greeting Card merchandising at…

For all Papyrus Store Fixtures
and Merchandising resources see…