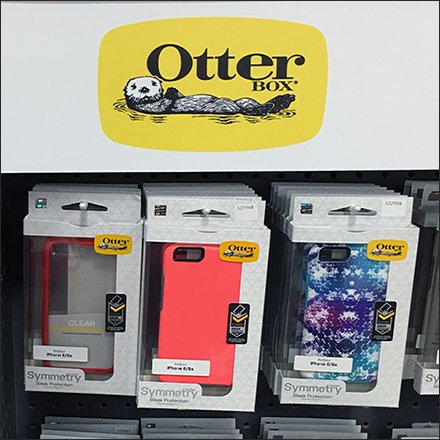 SCROLL DOWN FOR PHOTOS AND LINKS…
…to OtterBox Retail Fixtures

This OtterBox Retail Fixtures index page aggregates links
to all post and photos of the brand’s retail merchandising and outfitting
as well as deep Background courtesy of Wikipedia.

In 1991, Curt Richardson made his first “Otterbox”, a completely water resistant box, in his garage in response to an increase in the popularity of water sports.[3] Richardson launched a company based on his finished 1995 Otterbox in 1998.[4] He was strongly influenced by the 1985 book about business theories, E-Myth.[3] In 2001, the company began to produce iPod cases,[4] which were introduced in 2004.[5] OtterBox left the market in 2010 to focus on mobile devices and technologies.[4] As of 2012, the company provides protection accessories for battlefield military technology.[6]

By early 2009, OtterBox had approximately 70 employees.[3] The company opened a 10-employee Ireland office in 2010 to handle the European, Middle Eastern, and African markets,[3] a Hong Kong office in 2011.[7] and later, a small Dubai sales office.[4] In 2012, OtterBox had 363 employees.[8]Curt Richardson announced he would be stepping down as CEO and taking the position of Chairman in July 2012.[9] He was replaced by Brian Thomas.[9]

Three start-up businesses grew from OtterBox: Nerdy Minds, Wild Rock PR, and 1OAK Technologies.[10] All three founders of these businesses worked at OtterBox and now are backed by the company as they continue to develop their products and services.[10] On May 22, 2013, Otterbox acquired the San Diego-based smartphone and tablet case manufacturer LifeProof.[11] OtterBox made $347.5 million in revenue in 2011.[8]

In November 2014, the company announced the departure of CEO Brian Thomas. The company has appointed the company’s president Peter Lindgren to the role of CEO to replace Thomas.[12]

The company also manufactures screen protectors under their “Clearly Protected” line. Products are manufactured in Mexico, China, and the United States.

In 2012, the company was named one of the Best Medium Workplaces by Great Place To Work for its expanding workforce, “carefree and creative habitat”, and 24 hours of paid time off for employee volunteer work. Their OtterCares foundation has donated over 3 million dollars since 2012, and primarily focuses on education for young children.[14] (SOURCE: Wikipedia)

EDITOR’S NOTE: Otter Box Retail Fixtures
Topmost posts may be scheduled but not yet live.
Please click further down the list if necessary