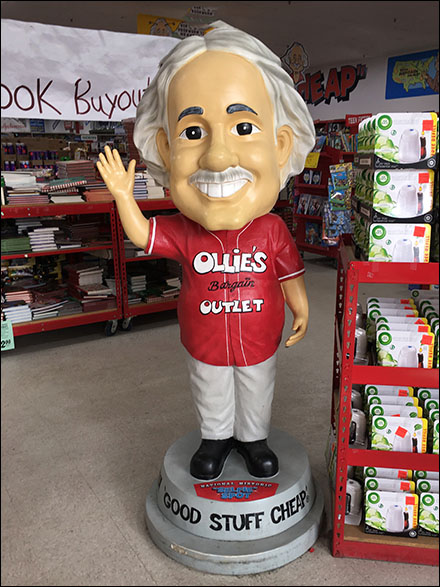 This Ollie’s Bargain Outlet Outfitting index page aggregates links
to all post and photos of retail merchandising, display, and outfitting
as well as deep Background courtesy of Wikipedia.

BACKSTORY: Ollie’s Bargain Outlet is an American chain of discount retail stores founded in 1982[1] by Morton Bernstein with backing from Harry Coverman and Oliver “Ollie” Rosenberg. The first store was opened in Mechanicsburg, Pennsylvania, just outside Harrisburg. As of November 2019, the chain has 345 locations in 25 states.[2]

Ollie’s stores feature its namesake co-founder Oliver E. Rosenberg, in the form of humorous caricatures throughout its stores’ interiors, merchandising displays and on its logo and exterior signage. Rosenberg, a capital area realtor and entrepreneur, died in 1996 at age 75.[3]

In 2008, the chain consolidated its four distribution warehouses into one located in York, Pennsylvania. In 2014, the chain opened its second distribution center in Commerce, Georgia.[4]