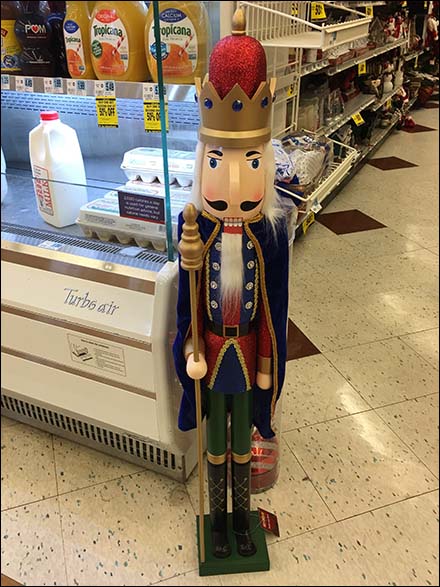 This Nutcracker Store Fixtures and Merchandising index page aggregates links
to all post and photos of retail merchandising, display, and outfitting
as well as deep Background courtesy of Wikipedia.

BACKSTORY: Nutcrackers in the form of wood carvings of a soldier, knight, king, or other profession have existed since at least the 15th century. Figurative nutcrackers are a good luck symbol in Germany, and a folk tale recounts that a puppet-maker won a nutcracking challenge by creating a doll with a mouth for a lever to crack the nuts.[3] These nutcrackers portray a person with a large mouth which the operator opens by lifting a lever in the back of the figurine. Originally one could insert a nut in the big-toothed mouth, press down and thereby crack the nut. Modern nutcrackers in this style serve mostly for decoration, mainly at Christmas time, a season of which they have long been a traditional symbol.[10] The ballet The Nutcracker derives its name from this festive holiday decoration.

The carving of nutcrackers—as well as of religious figures and of cribs—developed as a cottage industry in forested rural areas of Germany. The most famous nutcracker carvings come from Sonneberg in Thuringia (also a center of dollmaking) and as part of the industry of wooden toymaking in the Ore Mountains. Wood-carving usually provided the only income for the people living there. Today the travel industry supplements their income by bringing visitors to the remote areas. Carvings by famous names like Junghanel, Klaus Mertens, Karl, Olaf Kolbe, Petersen, Christian Ulbricht and especially the Steinbach nutcrackers have become collectors‘ items.

Decorative nutcrackers became popular in the United States after the Second World War, following the first US production of The Nutcracker ballet in 1940 and the exposure of US soldiers to the dolls during the war.[11] In the United States, few of the decorative nutcrackers are now functional, though expensive working designs are still available.[11] Many of the woodworkers in Germany were in Erzgebirge, in the Soviet zone after the end of the war, and they mass-produced poorly-made designs for the US market. With the increase in pre-shelled nuts the need for functionality was also lessened. After the 1980s, Chinese and Taiwanese imports that copied the traditional German designs took over.[3][11] The recreated “Bavarian village” of Leavenworth, Washington, features a nutcracker museum. Many other materials also serve to make decorated nutcrackers, such as porcelain, silver, and brass; the museum displays samples. The United States Postal Service (USPS) issued four stamps in October 2008 with custom-made nutcrackers made by Richmond, Virginia artist Glenn Crider.[12] (SOURCE: Wikipedia)

For Nutcracker Store Fixtures and Merchandising by title see…

For all Nutcracker Store Merchandising Resources…