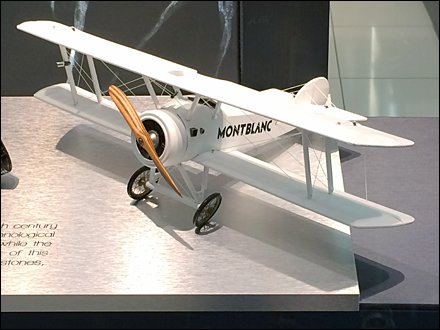 This Montblanc Pen Display and Merchandising index page aggregates links
to all post and photos of retail merchandising, display, and outfitting
as well as deep Background courtesy of Wikipedia.

A Hamburg banker, Alfred Nehemias, and a Berlin engineer, August Eberstein, produced simple pens in 1906. After a short period of time Wilhelm Dziambor, Christian Lausen and later Claus Johannes Voss took over the business. Their first model was the Rouge et Noir in 1909 followed in 1910 by the pen that was later to give the company its new name, Montblanc. The Meisterstück name (English: “Masterpiece”, the name used for export) was used for the first time in 1924. Today, the Montblanc brand is on other goods besides pens, including watches, jewellery, fragrances, leather goods and eyewear.

The company was acquired by dunhill in 1977, following which lower price pens were dropped and the brand was used on a wide range of luxury goods other than pens.[3]

For all Montblanc Pen Display and Merchandising resources…