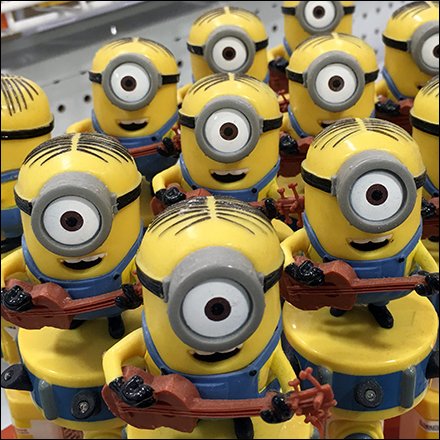 SCROLL DOWN FOR PHOTOS AND LINKS…
…to Minions Store Fixtures

This Minions Store Fixtures index page aggregates links
to all posts and photos of retail merchandising, display, and outfitting
as well as deep Background courtesy of Wikipedia.

BACKSTORY: Minions are the numerous creatures that appear in the Despicable Me franchise, which began with the eponymous 2010 film. They are also the official mascots of Illumination Entertainment, a division of Universal Studios, and have been described as being a corporate icon for Universal/Illumination’s parent company Comcast on par with Disney‘s Mickey Mouse following Comcast’s purchase of NBCUniversal.[1]

The Minions are small, yellow, melodious henchmen who wear overalls and goggles and have one or two eyes. They mostly speak incomprehensible gibberish, which is partly derived from other languages, including Bahasa Indonesia, French, English, Italian, Spanish, and Hindi.[2][3][4] Although seemingly nonsensical, the English-sounding words are dubbed for every country, in order to make them recognizable.[5]

In Minions it is made clear that they have existed since the beginning of life on Earth, and desire above all else to serve the most terrible of villains.[6] In the short film “Banana“, the Minions are revealed to have an uncontrollable craving for fruits, especially bananas. They have most ordinary names, with Kevin, Stuart and Bob being the names of the lead trio in Minions, and Mel being the leader of the Minions in Despicable Me 3.[7][8]

Since the release of the Despicable Me films, their popularity has been rising. The Minions have been regularly featured in cross-promotions for other Comcast / NBCUniversal properties, including Universal theme parks, NBC primetime TV series, and even an Xfinity remote control.[1]

The Minion variants of the Simpsons appear at the end of The Simpsons episode “Treehouse of Horror XXV“.

In 2015 the town of Minions, Cornwall built a road sign paid for by Universal Studios featuring Minions. In October they removed it due to safety concerns that resulted from people stopping their cars to take photos although townspeople have campaigned to get the sign put back up in another location.[9][10][11]

On April Fool’s Day 2016, Google created a button on its Gmail service that sent a “mic drop” along with a GIF of a minion.[12][13] However, the feature immediately caused backlash. Many people complained about accidentally sending the GIF during job searches, which resulted in some people being dropped from job consideration or even being fired. Google removed the feature not long after, citing those reasons and a bug that caused the GIF to be sent after hitting the regular send button.[14][15]

The Minions appeared in an advertisement for the Cinemark theater chain, in which several Minions tried to change a light bulb while another one of them mocked them. He dropped the replacement lightbulb during one of his laughing fits, so the others ended up sticking him in the socket so that his eye could serve as the light. The short was to promote the chain’s claim that they had the brightest 3D projection system of any other theater chain. At first, the clip played exclusively before showings of Despicable Me 2, but Cinemark now uses the clip freely before any 3D movie. (SOURCE: Wikipedia)

EDITOR’S NOTE: Minions Store Fixtures
Topmost posts may be scheduled but not yet live.
Please click further down the list if necessary.

How To Lower License Fees on Consumable Products