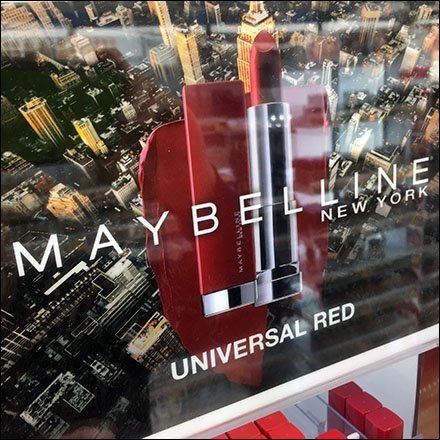 SCROLL DOWN FOR PHOTOS AND LINKS…
…to Maybelline Cosmetics Displays

This Maybelline Cosmetics Displays index page aggregates links
to all post and photos of retail merchandising, display, and outfitting
as well as deep Background courtesy of Wikipedia.

BACKSTORY: Maybelline or Maybelline New York is an American multinationalcosmetics, skin care, fragrance and personal carecompany, based in New York City. It was founded in Chicago in 1914,[3] and has been a subsidiary of French cosmetics company L’Oréal since 1996.[4]

The Maybelline Company was founded in Chicago by Thomas Lyle Williams in 1915. Williams noticed his older sister Mabel applying a mixture of Vaseline and coal dust to her eyelashes to give them a darker, fuller look. He adapted it with a chemistry set and produced a product sold locally called Lash-Brow-Ine.

Williams renamed his eye beautifier Maybelline in her honor. In 1917, the company produced Maybelline Cake Mascara, “the first modern eye cosmetic for everyday use,” and Ultra Lash, the first mass-market automatic, in the 1960s.[5]

In 1967, the company was sold by Williams to Plough Inc. (now Schering-Plough) in Memphis, Tennessee. The entire cosmetic production facility was moved from Chicago to Memphis over one weekend. In 1975, the company moved to Little Rock, Arkansas, where it is still located. In 1990, Schering-Plough sold Maybelline to a New York investment firm, Wasserstein Perella & Co. Maybelline’s headquarters remained in Memphis until its acquisition by L’Oréal in 1996. Its headquarters was then moved to New York City in 1996 and its factory to Brooklyn in 2000.[6]

For all Maybelline Cosmetics Displays resources…