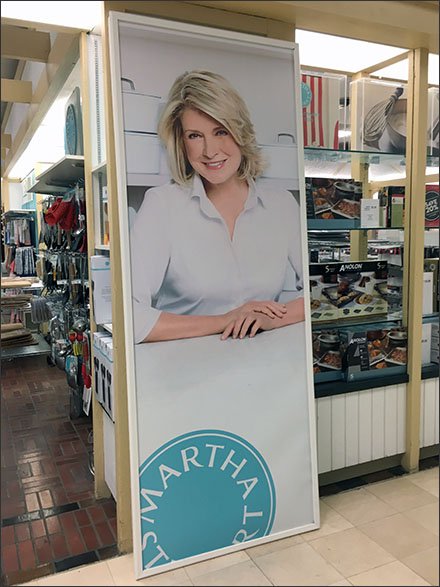 Getting In On Branding At The Ground Level

SCROLL DOWN FOR PHOTOS AND LINKS…
…to Martha Stewart Store Fixtures

This Martha Stewart Store Fixtures index page aggregates links
to all post and photos of retail merchandising, display, and outfitting
as well as deep Background courtesy of Wikipedia.

In 2004, Stewart was convicted of charges related to the ImClone stock trading case. There was speculation that the incident would effectively end her media empire,[2][3][4] although Stewart began a comeback campaign in 2005[5] and her company returned to profitability in 2006.[6] Stewart rejoined the board of directors of Martha Stewart Living Omnimedia in 2011[7] and became chairman of her namesake company again in 2012.[8] The company was acquired by Sequential Brands in 2015.[9] (SOURCE: Wikipedia)

Martha Stewart Living television debuted as a weekly half-hour syndicated show in September 1993. Intended to complement the magazine, it featured Stewart as the host. It expanded to weekdays in 1997, became a full hour long program in 1999 (with a 30-minute weekend edition), and went on hiatus in autumn of 2004 following Stewart’s stock trading case and conviction. The show was distributed by Group W Productions from 1993–1996, Eyemark Entertainment following the CBS-Westinghouse merger from 1996–2000, then King World Productions following CBS’ merger with King World from 2000-2004. The new Martha Stewart Show program replaced MSL in 2005 and was cancelled after seven seasons [5]

Both the magazine and the television show have won numerous awards[6][citation needed]. In the period 2005-13, Martha Stewart Living made a profit only in 2007.[7][7] (SOURCE: Wikipedia)