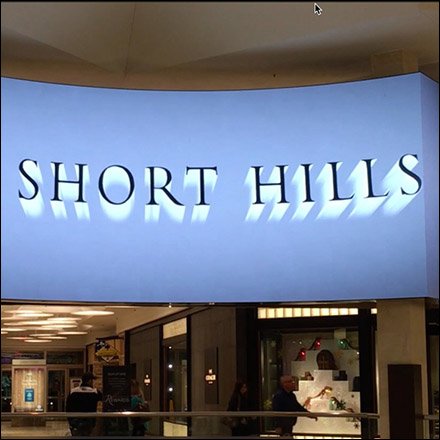 This Short Hills Mall Retail Fixtures index page aggregates links
to all post and photos of tretail merchandising, display, and outfitting
as well as deep Background courtesy of Wikipedia.

BACKSTORY: The Mall at Short Hills (commonly referred to as Short Hills Mall) is a shopping center located in the Short Hills area of Millburn, New Jersey, United States. The shopping center is located 10 miles (16 km) west of Newark Liberty International Airport and 23 miles (37 km) west of Manhattan. The mall includes 150 specialty stores and restaurants including Cartier, Chanel, Dior, Gucci, Hermès, and Louis Vuitton, and is anchored by Bloomingdale’s, Macy’s, Neiman Marcus, and Nordstrom. Over 40 boutiques have their only New Jersey location at the mall.

Rich in history, the area surrounding The Mall at Short Hills grew from the dream of a single poet with a passion for nature and love of literature.

Today, only 23 miles due west of midtown Manhattan, The Mall at Short Hills draws from some of the country’s wealthiest communities, offering a suburban setting with easy access to New York.

One of the first planned communities in the country, Short Hills was the dream of Stewart Hartshorn, a poet and nature lover who purchased 1,500 acres of New Jersey land in the late 1800s. There he pursued his lifelong dream, reading good books and writing his verse in a tranquil, natural setting.

Throughout the first half of the century, the suburban community grew quickly, and local residents desired quality shopping within their local setting. Their vision began to take shape in 1949 when the Prudential Insurance Company of America acquired a large tract of land where The Mall at Short Hills and part of the Canoe Brook Country Club now sit. Seven years later, B. Altman opened a 130,000-square-foot store on the land and eventually added an additional 50,000 square feet to meet market demands. Local residents continued their demand for expanded retailing and in the early ’60s, a small center opened. The open-air center included Bonwit Teller along with retailers such as FAO Schwarz, Pottery Barn and Brentano’s. The momentum continued as America’s largest Bloomingdale’s premiered on the site in 1967. The 243,000-square-foot store included an entire floor devoted to furniture and decorative accessories. In addition, smaller “boutiques” were created in the store such as, Young World, Delicacies Shop, Au Gourmet, a men’s store, and a restaurant.

In 1974, Prudential Insurance Company of America began working with The Taubman Company, The Mall at Short Hills’ current owner. By 1980, the two had completed a two-year, $100 million project to enclose the mall, which at that time included 1,160,000 of gross leasable space and three anchor stores. New retailers included Godiva Chocolatier, Black Star and Frost, The Limited and Gap. The following year, 1981, Abraham and Strauss joined the center.

The Mall at Short Hills boasts an unparalleled department and specialty store offering, establishing it as the region’s prominent shopping center. (SOURCE: Wikipedia)

For Lush Cosmetics
at The Short Hills Mall see…

Celebrate the Holiday Season at Short Hills Mall with…