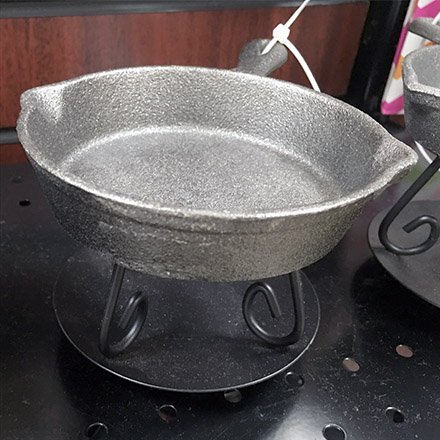 This Lodge Cast Iron Cookware Merchandising index page aggregates links
to all post and photos of retail merchandising, display, and outfitting
as well as deep Background courtesy of Wikipedia.

BACKSTORY: Lodge Manufacturing Company is an American manufacturer of cast iron cookware based in South Pittsburg, Tennessee. Founded in 1896 by Joseph Lodge, Lodge Manufacturing is one of America’s oldest cookware companies in continuous operation. It is still owned and managed by the descendants of the Lodge family. Most cast iron sold by Lodge is produced in its foundry in South Pittsburg, which has been in operation since the company was founded.

Founded in 1896 by Joseph Lodge, Lodge Manufacturing is one of America’s oldest cookware companies in continuous operation. Joseph Lodge and his wife settled in South Pittsburg, Tennessee, a town of 3,000 people along the Tennessee River beside the Cumberland Plateau. (SOURCE: Wikipedia)

BACKSTORY: Cast iron is a group of iron–carbon alloys with a carbon content greater than 2%.[1] Its usefulness derives from its relatively low melting temperature. The alloy constituents affect its colour when fractured: white cast iron has carbide impurities which allow cracks to pass straight through, grey cast iron has graphite flakes which deflect a passing crack and initiate countless new cracks as the material breaks, and ductile cast iron has spherical graphite “nodules” which stop the crack from further progressing.

Carbon (C) ranging from 1.8–4 wt%, and silicon (Si) 1–3 wt% are the main alloying elements of cast iron. Iron alloys with lower carbon content (~0.8%) are known as steel. While this technically makes the Fe–C–Si system ternary, the principle of cast iron solidification can be understood from the simpler binary iron–carbon phase diagram. Since the compositions of most cast irons are around the eutectic point (lowest liquid point) of the iron–carbon system, the melting temperatures usually range from 1,150 to 1,200 °C (2,100 to 2,190 °F), which is about 300 °C (540 °F) lower than the melting point of pure iron of 1,535 °C (2,795 °F).

Cast iron tends to be brittle, except for malleable cast irons. With its relatively low melting point, good fluidity, castability, excellent machinability, resistance to deformation and wear resistance, cast irons have become an engineering material with a wide range of applications and are used in pipes, machines and automotive industry parts, such as cylinder heads (declining usage), cylinder blocks and gearbox cases (declining usage). It is resistant to destruction and weakening by oxidation.

The earliest cast-iron artifacts date to the 5th century BC, and were discovered by archaeologists in what is now Jiangsu in China. Cast iron was used in ancient China for warfare, agriculture, and architecture.[2] During the 15th century, cast iron became utilized for cannon in Burgundy, France, and in England during the Reformation. The amounts of cast iron used for cannon required large scale production.[3] The first cast-iron bridge was built during the 1770s by Abraham Darby III, and is known as The Iron Bridge. Cast iron was also used in the construction of buildings. (SOURCE: Wikipedia)