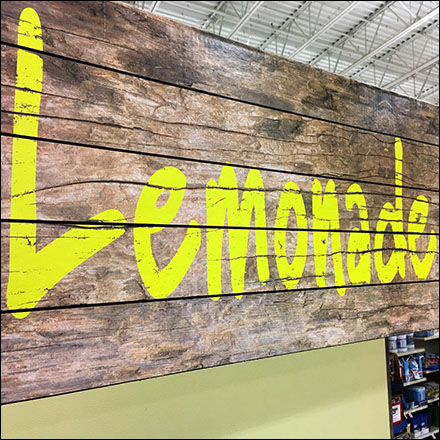 SCROLL DOWN FOR PHOTOS AND LINKS…
…to Lemonade Merchandising Displays

This Lemonade Merchandising Displays index page aggregates links
to all post and photos of retail merchandising, display, and outfitting
as well as deep Background courtesy of Wikipedia.

BACKSTORY: Lemonade is a sweetened lemon-flavored beverage. There are varieties of lemonade found throughout the world.[1] In North America and South Asia, cloudy lemonade dominates. It is traditionally a homemade drink using lemon juice, water, and a sweetener such as cane sugar, simple syrup or honey.[2] In the United Kingdom and Australia, clear lemonade, a carbonated drink, is preferred.[3][self-published source?] Despite the differences between the drinks, each is known simply as “lemonade” in countries where it is dominant.[3]

The suffix “-ade” may also be applied to other similar drinks made with different fruits, such as limeade, orangeade, or cherryade.[4] (SOURCE: Wikipedia)

For Lemonade at the Ritz Carlton see …

For all Lemonade Merchandising Displays resources…