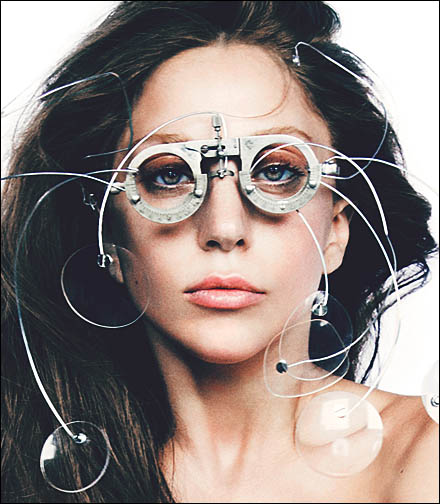 SCROLL DOWN FOR PHOTOS AND LINKS…
…to Lady Gaga Retail Fixtures

This Lady Gaga Displays index page aggregates links
to all post and photos of the brand’s retail merchandising and outfitting.

Stefani Joanne Angelina Germanotta (/ˈstɛfəniː dʒɜːrməˈnɒtə/ STEF-ə-nee jur-mə-NOT-ə; born March 28, 1986), known professionally as Lady Gaga, is an American singer, songwriter, and actress. At the beginning of her career, Gaga became known for her unconventionality and provocative work. A popular contemporary recording artist, she is noted for constantly experimenting with new musical ideas and images.

Gaga initially played roles in high school plays, and studied at CAP21 through NYU’s Tisch School of the Arts before dropping out to pursue a musical career. After leaving a rock band, participating in a performance art circuit, and being dropped from a contract with Def Jam Recordings, Gaga worked as a songwriter for Sony/ATV Music Publishing. From there, Akon noticed her vocal abilities and helped her sign a joint deal with Interscope Records and his own KonLive Distribution in 2007. Gaga rose to prominence with the release of her successful debut album The Fame (2008) and its international chart-topping singles “Just Dance” and “Poker Face“. A follow-up EP, The Fame Monster (2009), was met with a similar reception and the singles “Bad Romance“, “Telephone“, and “Alejandro” were also successful.

Gaga’s second full-length album Born This Way (2011) topped the charts in more than 20 countries, including the US, where it sold over one million copies in its first week. The album produced the number-one single “Born This Way“. Gaga’s third album Artpop, released in 2013, topped the US charts and included the successful single “Applause“. In 2014, Gaga released a collaborative jazz album with Tony Bennett titled Cheek to Cheek, her third consecutive number one in the US. For her work in the television series American Horror Story: Hotel, Gaga won a Golden Globe Award in 2016. With her fifth studio album Joanne (2016), she became the first woman to have four US number one albums in the 2010s. In February 2017, Gaga headlined the Super Bowl LI halftime show, which had over 150 million audience across various platforms worldwide, making it the most viewed musical event in history.

With global album and single sales of 27 million and 146 million respectively, as of January 2016, she is one of the best-selling musicians of all time. Her achievements include several Guinness World Records, three Brit Awards, and six Grammy Awards. She has also received awards from the Songwriters Hall of Fame and the Council of Fashion Designers of America. Gaga regularly appears on Billboard‘s Artists of the Year lists and Forbes‘s power and earnings rankings. She was ranked at number four on VH1‘s Greatest Women in Music, finished second on Time‘s 2011 readers’ poll of the most influential people of the past ten years, and was named Billboard‘s Woman of the Year (2015). She is known for her philanthropic work and social activism, including LGBT rights and her own non-profit organization, the Born This Way Foundation, which focuses on promoting youth empowerment and combating bullying.

Gaga grew up listening to artists such as The Beatles, Stevie Wonder, Queen, Bruce Springsteen, Pink Floyd, Mariah Carey, The Grateful Dead, Led Zeppelin, Whitney Houston, Elton John, Blondie, and Garbage,[180] who all influenced her.[181][182] She has cited heavy metal bands as an influence, stating that Iron Maiden “changed my life” and describing herself as “the biggest Black Sabbath fan on Earth”.[183] Gaga’s musical inspiration varies from dance-pop singers like Madonna and Michael Jackson to glam rock artists like David Bowie and Freddie Mercury, as well as the theatrics of the pop artist Andy Warhol and her own performance roots in musical theater.[33][184][185][186] Gaga has often been compared to Madonna who admits that she sees herself reflected in Gaga.[187] Gaga has stated that she aspires to revolutionize pop music like by Madonna did 25 years ago, concluding that she is her big fan.[188] Like Madonna, Gaga has continued to reinvent herself.[189]

Another spiritual influence on Gaga has been the Indian physician, public speaker, and writer Deepak Chopra. Labeling him a “true inspiration”, she stated that “he’s always reminded me to work in a life of service to my fans and to fulfill my vision and my destiny” in addition to thinking about Chopra when it comes to her work as a musician: “I want so much for it to go beyond the music for my fans.”[190] Gaga also lifted a quote from Osho‘s book Creativity on Twitter.[191][192] Gaga says she was influenced by his work and that, for her, “the creativity is the greatest way of rebellion”: “Equality … is one of the most important things in my life.”[193]

Fashion is a major influence for Gaga; she says that her interest in fashion came from her mother who was “always very well kept and beautiful.”[194] Her musical endeavors are directly linked with fashion; she explains, “When I’m writing music, I’m thinking about the clothes I want to wear on stage. It’s all about everything altogether—performance art, pop performance art, fashion.”[28] Gaga has been stylistically compared to Leigh Bowery, Isabella Blow, and Cher.[15][28][195][196] She commented that as a child, she somehow absorbed Cher’s out-there fashion sense and made it her own.[196] Gaga considers Donatella Versace her muse, and the late English fashion designer and close friend Alexander McQueen as an inspiration, admitting that “I miss Lee every time I get dressed” while channeling him in some of her work.[15][81] In turn, Versace calls Lady Gaga “the fresh Donatella”.[197] Gaga has also been influenced from Princess Diana, whom she and her mother have admired since her childhood.[198]