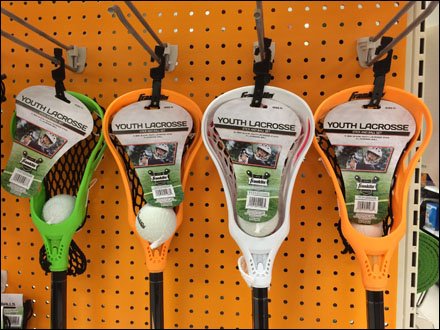 Backstory: This Index of Lacrosse Fixtures and Merchandising covers retailing of all type Lacrosse items. Lacrosse is a contact team sport played between two teams using a small rubber ball (62.8–64.77 mm (2.472–2.550 in), 140–147 g (4.9–5.2 oz)) and a long-handled stick called a crosse or lacrosse stick. The men’s version is considered as a rough sport, with slashes and intense checks to the stick and body. The head of the lacrosse stick is strung with loose mesh designed to catch and hold the lacrosse ball. There are many different ways to put mesh on the head of the stick, also known as “stringing the stick.”

Offensively, the objective of the game is to score by shooting the ball into an opponent’s goal past the goalie, using the lacrosse stick to catch, cradle, and pass the ball to do so. Defensively, the objective is to keep the other team from scoring and to gain the ball through the use of stick checking and body contact or positioning. The sport has four major types: men’s field lacrosse, women’s lacrosse, box lacrosse and intercrosse. The sport consists of four positions: midfield, attack, defense and goalie. In field lacrosse, attacks are solely offensive players (except on the “ride”, when the opposition tries to bring the ball upfield and attackers must stop them), defensemen or defenders are solely defensive players (except when bringing up the ball, which is called a “clear”), the goalie is the last line of defense, directly defending the goal, and midfielders or “middies” can go anywhere on the field and play offense and defense, although in higher levels of lacrosse there are specialized offensive and defensive middies. Long stick middies only play defense and come off of the field on offense.

Lacrosse has roots in the cultural tradition of the Native American Iroquois people, inhabiting what is now New York, Pennsylvania, and other parts of the Northeastern US and lower parts of Ontario and Quebec. As a result of its origins, it is traditionally a Northeastern US, or “east coast” sport, but in recent years has successfully grown into the South, Midwest, and western parts of America. Lacrosse may have been developed as early as 1100 AD among indigenous peoples on the North American continent. By the seventeenth century, it was well-established. It was documented by Jesuit missionary priests in the territory of present-day Canada. The game has undergone many modifications since that time.

In the traditional aboriginal Canadian version, each team consisted of about 100 to 1,000 men on a field that stretched from about 500 m (1,600 ft) to 3 km (1.9 mi) long.[5] These games lasted from sunup to sundown for two to three days straight. These games were played as part of ceremonial ritual, a kind of symbolic warfare, to give thanks to the Creator or Master. James Smith described in some detail a game being played in 1757 by his fellow tribe members “wherein now they used a wooden ball, about 7.6 cm (3 in) diameter, and the instrument they moved it with was a strong staff about 1.5 m (5 ft) long, with a hoop net on the end of it, large enough to contain the ball.” The Italian explorer Count Paolo Andreani documented his contacts with the Oneida people in the 1790s and his reports on the Oneida include an illustration which is thought to be the first recorded picture of a lacrosse stick.

For all Lacrosse Fixtures and Merchandising see…