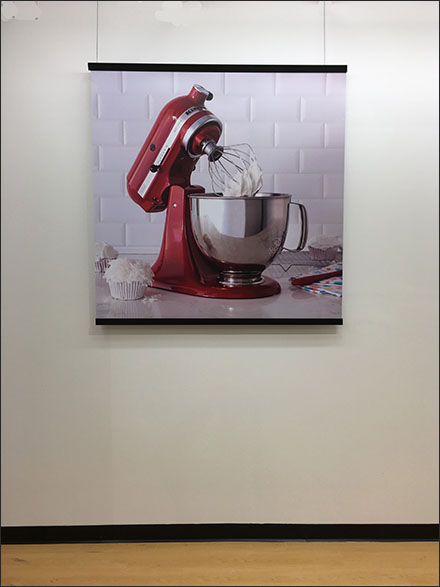 SCROLL DOWN FOR PHOTOS AND LINKS…
…to KitchenAid Retail Fixtures

This KitchenAid Retail Fixtures index page aggregates links
to all post and photos of the brand’s retail merchandising and outfitting.

KitchenAid is an American home appliance brand owned by Whirlpool Corporation. The company was started in 1919 by The Hobart Corporation to produce stand mixers; the “H-5” was the first model introduced. The company faced stiff competition as rivals moved into this emerging market, and introduced its trademarked silhouette in the 1930s with the model “K”, the work of designer Egmont Arens. The brand’s stand mixers have changed little in design since, and attachments from the model “K” onwards are compatible with the modern machines. Dishwashers were the second product line to be introduced, in 1949. A late 1980s promotional campaign on the back of an expansion by retailer Williams-Sonoma saw brand awareness double in three years.

The idea of a stand mixer was formulated by Herbert Johnston, an engineer working at the Hobart Corporation. He had been inspired after seeing a baker mix dough, and thought that there must be a better way of doing the task. In 1914, development began, and soon the model “H” mixer was launched for industrial work. The U.S. Navy ordered mixers for two new Tennessee-class battleships, California and Tennessee, as well as the U.S. Navy’s first dreadnought battleship, South Carolina. In 1917, Hobart stand mixers became standard equipment on all U.S. Navy ships, prompting development to begin on the first home models.[1]

The first machine to carry the KitchenAid name was the ten-quart C-10 model, introduced in 1918 and built at Hobart’s Troy Metal Products subsidiary in Springfield, Ohio.[2] Prototype models were given to the wives of factory executives, and the product was named when one stated “I don’t care what you call it, but I know it’s the best kitchen aid I’ve ever had!” They were initially marketed to the farmhouse kitchen and were available in hardware stores.[3]But owing to the difficulty in convincing retailers to take up the product, the company recruited a mostly female sales force, which sold the mixers door-to-door.[1] The C-10 machine was also marketed heavily toward soda fountains and small commercial kitchens, and was also sold under the FountainAid and BakersAid model names.[4]

In 1922, KitchenAid introduced the H-5 mixer as its new home-use offering.[5] The H-5 mixer was smaller and lighter than the C-10, and had a more manageable five-quart bowl. The model “G” mixer, about half the weight of the “H-5” was released in August 1928.[6] In the 1920s, several other companies introduced similar mixers, and the Sunbeam Mixmaster became the most popular among consumers until the 1950s.[7]

KitchenAid mixers remained popular, and in the late 1930s, the factory would completely sell out its products each Christmas. The factory was closed for the duration of World War II. After the war, production started up again in 1946 when the factory moved to Greenville, Ohio, to expand capacity.[1]

The product range expanded beyond stand mixers for the first time in 1949, when dishwashers were introduced.[3]

In 1985, the company purchased the Chambers Company to incorporate its range of cookers into the KitchenAid brand.[1] After being cleared by a Federal appeals court in January 1986, Whirlpool Corporation was cleared to purchase KitchenAid after initial complaints regarding competition from dishwasher manufacturers White Consolidated Industries and Magic Chef were dismissed.[8]Refrigerators were added to the product line later in 1986.[1] The company used the popularity of celebrity chefs during the late 1980s to seize the chance to expand its customer range. In 1988, retailer Williams-Sonoma was opening new stores across the United States and released a cobalt blue stand mixer for the company. Although the retailer had been carrying KitchenAid products since 1959, the new stores introduced the mixers to a wider range of home cooks. This combined with a change in marketing strategy for KitchenAid, which resulted in a doubling of brand awareness over the course of the following three years.

KitchenAid began manufacturing blenders and other small appliances in the mid-1990s. The brand was further promoted by sponsoring the PBS show Home Cooking, and by introducing the mixers to television chefs such as Julia Child and Martha Stewart. Following the success with William-Sonoma, specific points of purchase were set up in department stores such as Kohl’s and Macy’s. Specific color mixers were released for specific retailers or to benefit charities, such as a pink mixer released to raise funds for breast cancer research or mixers sold at Target stores being available in that company’s signature shade of red. The ProLine range of appliances was launched in 2003 with an initial six-month exclusivity agreement with Williams-Sonoma.[9]