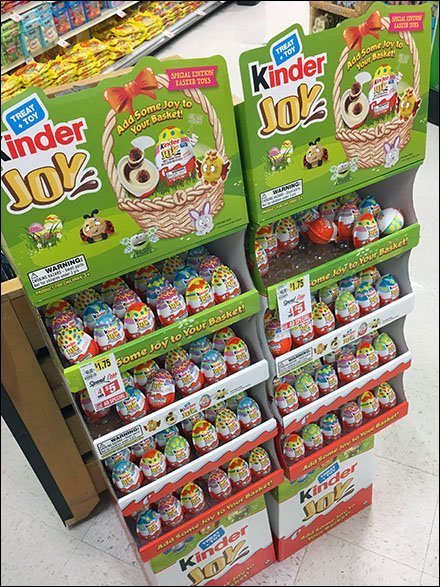 SCROLL DOWN FOR PHOTOS AND LINKS…
…to Kinder Joy Merchandising Displays

This Kinder Joy Merchandising Displays index page aggregates links
to all post and photos of retail merchandising, display, and outfitting
as well as deep Background courtesy of Wikipedia.

BACKSTORY: Kinder Joy (formerly known as Kinder Merendero in Italy) is a candy made by Italian confectionery company Ferrero as part of its Kinder brand of products. It has plastic egg-shaped packaging that splits into two; one half contains layers of cocoa and milk cream, and the other half contains a toy. Kinder Joy was launched in Italy in 2001 and as of 2014 was sold in more than 100 countries.

Kinder Joy is a brand within the Kinder line of chocolate products sold by Ferrero.[1][2] It has a plastic egg-shaped package with a tab to open it into two halves.[1] One sealed half contains layers of cocoa and milk-flavoured creams topped with two cocoa waferspheres, to be eaten with an included spoon.[3][4] The other half contains a toy.[2][5] As of 2015, Kinder Joy is produced in Poland, India, South Africa, Ecuador, Cameroon,[6] and China.[7] First ingredient is sugar, second is vegetable oils (palm, sheanut, sunflower) as listed on the toy in the ingredients list.[citation needed] (SOURCE: Wikipedia)